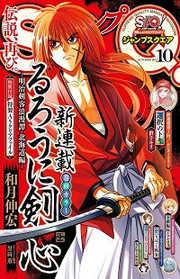 Am happy to inform you that Samurai X is back, after twenty years since the original manga ended. Suddenly this year becomes more meaningful to me 😂😂😂 never could have imagined, that I would be able to read a new chapter after the manga supposedly ended.

I like many others hope the existence of this manga disapproves the horrible ending of the OVA Reflection. Most fans of Kenshi Himura would like to forget that OVA ever happened where Kenshi is till very much plagued by is past as a man slayer, suffers from an incurable disease and the his family is upside down with is son hating him. They didn’t pull any punches and Kenshi is really a shadow of himself around the end, only good thing at the end is he manages to make it home just bearly into the arms of Kamiya Kaoru and is crossed shaped scar completely gone. 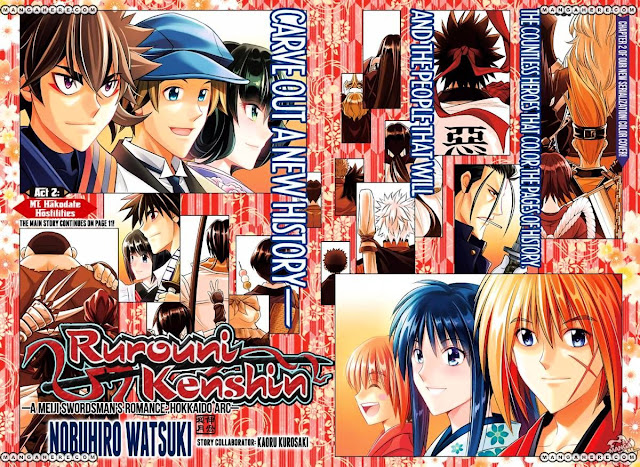 So far it’s been great, old and new characters so far :

Sagara Sanosuke has not made an appearance but we know he’s fleeing to America after never paying his bills and running a very large tab at the Akabeko (Beef Pot Restaurant).

Myōjin Yahiko is now an assistant master at the Kamiya dojo and is more mature and seems to have become a fine swords man.

Takani Megumi,Hiko Seijūrō XIII and Shinomori Aoshi have all yet to make an appearance yet.

Saitō Hajime is till working in the police force currently about to fight The Swordsmen Weapons on Hokkaido.

Kenji Himura is the cute little boy Kaoru and Kenshi have together and he just seems to be loving life.

Alan Inoue is one of the new characters joining the Samurai X world, he is of mixed heritage. father is a white man has a previous conviction for attempted smuggling and is a live in student at the dojo. He is a bookworm prefering to train is mind than work on training is body.

Ashitaro Hasegawa a remnant of Shishio’s forces as a former habit of eating and not paying like Sanosuke and like Alan he’s a live in student at the dojo, he inherited Makoto Shishio’s sword. Mugenjin (the cool sword that can be lit on fire,like games of thrones) seems an ok swords man but loses himself when hes emotional and cant tell apart friend from foe.

Asahi Kubota is a girl who seems really into changing herself, worked under Shishio. Trying to buy her freedom form her mercenary village and currently living at the Kamiya dojo.

So far it’s made some reader of Kenshi go back and read the old chapters all over again and so far it’s ticking all my boxes as a good read this year. It’s brings back a lot of memories for me cause I been a fan of Kenshi Himura since I was little. Plus if we are lucky we are looking at new anime adaptions and movies 😍😍

So please leave your comments let me know what you think too. ☺

Yamada-kun to 7-nin no Majo