Want to know who the Cutest Anime Guys with Glasses are? Then go ahead and read on, you won’t be disappointed! I’m a sucker for cute anime guys with glasses, so I had to make this list. Also included is a brief synopsis of the anime itself. Just in case you haven’t already seen it, and want to watch these cute guys in action!

Reeling from his crushing defeat at the Grand Prix Finale, Yuuri Katsuki, once Japan’s most promising figure skater, returns to his family home to assess his options for the future. At age 23, Yuuri’s window for success in skating is closing rapidly. Sadly, his love of pork cutlets and aptitude for gaining weight are not helping either.

However, Yuuri finds himself in the spotlight when a video of him performing a routine previously executed by the five-time world champion, Victor Nikiforov, suddenly goes viral. In fact, Victor himself abruptly appears at Yuuri’s house and offers to be his mentor. As one of his biggest fans, Yuuri eagerly accepts, kicking off his journey to make it back onto the world stage. But the competition is fierce, as the rising star from Russia, Yuri Plisetsky, is relentlessly determined to defeat Yuuri and win back Victor’s tutelage.

Yuuri is just adorable and I love all of his facial expressions. The relationship between him and Victor is priceless. 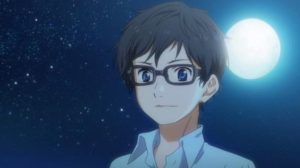 Music accompanies the path of the human metronome, the prodigious pianist Kousei Arima. But after the passing of his mother, Saki Arima, Kousei falls into a downward spiral, rendering him unable to hear the sound of his own piano.

Two years later, Kousei still avoids the piano, leaving behind his admirers and rivals, and lives a colorless life alongside his friends Tsubaki Sawabe and Ryouta Watari. However, everything changes when he meets a beautiful violinist, Kaori Miyazono, who stirs up his world and sets him on a journey to face music again.

I cried watching this anime, much like everyone else who watched this. Not only is he cute, but I related to his feelings of depression, anxiety, and PTSD more and more. Definitely, an anime that you should be watching! 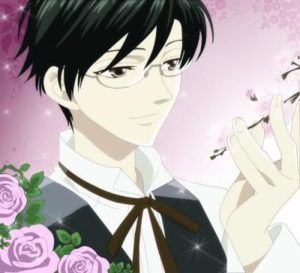 Everyone’s favorite Shadow King. I’m a huge fan of Ouran High School Host Club, and Kyou just made it even better. Haruhi Fujioka is a bright scholarship candidate with no rank or title to speak of—a rare species at Ouran High School, an elite academy for students of high pedigree. When she opens the door to Music Room #3 hoping to find a quiet place to study, Haruhi unexpectedly stumbles upon the Host Club. Led by the princely Tamaki, the club—whose other members include the “Shadow King” Kyouya, the mischievous Hitachiin twins, and the childlike Haninozuka “Honey” and his strong protector Mori—is where handsome boys with too much time on their hands entertain the girls in the academy.

In a frantic attempt to remove herself from the hosts, Haruhi ends up breaking a vase worth eight million yen and is forced into becoming the eccentric group’s general errand boy to repay her enormous debt. However, thanks to her convincingly masculine appearance, her naturally genial disposition toward girls, and fascinating commoner status, she is soon promoted to full-time male host and plunged headlong into a glitzy whirlwind of elaborate cosplays, rich food, and exciting shenanigans that only the immensely wealthy Ouran Host Club can pull off. 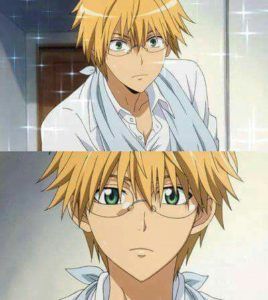 Usai doesn’t wear glasses all the time, but when he does…ooh boy. Being the first female student council president isn’t easy, especially when your school just transitioned from an all-boys high school to a co-ed one. Aptly nicknamed “Demon President” by the boys for her strict disciplinary style, Misaki Ayuzawa is not afraid to use her mastery of Aikido techniques to cast judgment onto the hordes of misbehaving boys and defend the girls at Seika High School.

Yet even the perfect Ayuzawa has an embarrassing secret—she works part-time as a maid at a maid café to help her struggling family pay the bills. She has managed to keep her job hidden from her fellow students and maintained her flawless image as a stellar student until one day, Takumi Usui, the most popular boy in school, walks into the maid café. He could destroy her reputation with her secret… or he could twist the student council president around his little finger and use her secret as an opportunity to get closer to her. 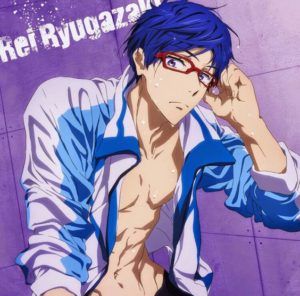 And of course, number one goes to my favorite anime boy wearing glasses of all…Rei!! Haruka Nanase has a love for water and a passion for swimming. In elementary school, he competed in and won a relay race with his three friends Rin Matsuoka, Nagisa Hazuki, and Makoto Tachibana. After claiming victory at the tournament, the four friends went their separate ways. Years later, they reunite as high school student. However, Rin couldn’t care less about returning to the way things used to be. Not only does he attend a different school, but the sole thing important to him is proving that he is a better swimmer than Haruka.

After the bitter reunion, Haruka, Nagisa, and Makoto decide to form the Iwatobi High School Swim Club. They will need a fourth member though if they hope to take part in the upcoming tournament. Enter Rei Ryuugazaki, a former member of the track team whom Nagisa recruits. As the time to compete draws near, the four develop a close bond while training intensely to come out on top and settle things between Haruka and Rin once and for all. 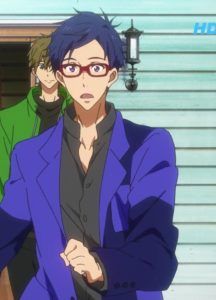 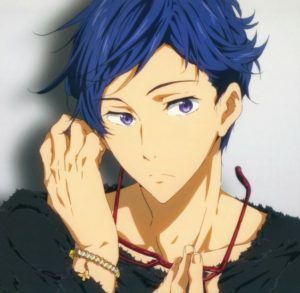 There you have it! Some of the best(in my opinion) anime guys with glasses. Of course, there are several others. I mean, there’s also Sebastian and Grell from Black Butler and COUNTLESS others, but these were my top fives.

Who was your favorite? Was there someone I missed? Let me know in the comments below! 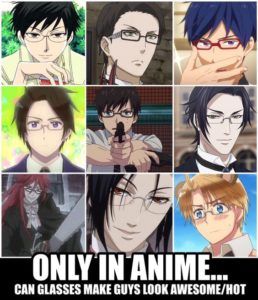 Spends her time watching anime and reading anything she can get her hands on. Also passionate about Disney, Harry Potter and helping those with depression and anxiety.
Articles: 130
Subscribe
1 Comment
Newest
Oldest
Inline Feedbacks
View all comments

Who Does Haruhi Belong With? Ouran High School Host Club