Some days are just harder than others. As an introvert, we all need an escape and anime can definitely bring that safe haven to us. Anime isn’t “just for kids” and can, at times, be darker and delve into some deeper issues. But when you need something light-hearted to make you laugh, these are my go-to animes for whenever I’m depressed or need a smile!

So, without further ado…

Best Anime to Watch When You’re Feeling Down

Of course, I would put Inuyasha as the first one. It was the first real anime and manga series that I read. I quickly fell in love with the characters from feudal and modern Japan. It involves a human girl, Kagome, who gets transported to the feudal time in Japan through the well of her family’s shrine. There she meets a hanyou, or half-demon, Inuyasha who was trapped in a tree by a sacred arrow. She then releases him and finds out he was after what is called the Shikon no Tama or Jewel of Four Souls, which lets the owner gain a wish. Kagome accidentally breaks the jewel and they have to go around the world looking for the missing pieces and fighting foes who have found them, as well as friends.

This is a great anime series if you’re wanting something cute with a bit of the older “Sailor Moon” type of feel. It’s nostalgic and the romance and laughter will keep you smiling for a while. Not to mention, it inspired so many great fanfictions!

I just discovered this anime last year when I was going through anime music videos.  Depression had hit me hard and I decided to give this anime a chance. By the first episode, I was hooked! And I do mean, soul-consuming, forget everything else hooked.

Marinette Dupain-Cheng and Adrien Agreste are given magic jewels known as Miraculous. These grant the holders certain powers. With an incantation, Marinette becomes Ladybug and Adrien becomes Chat Noir. Together, they protect Paris from akumas. These come from the villain Hawkmoth, all while trying to keep their identities a secret!

This anime is just super cute. The second season was just released and I’m still hopelessly waiting for the next episode. The best(and most frustrating) part of the show is that Marinette is in love with Adrien, Adrien is in love with Ladybug, and Chat Noir loves Ladybug. They’re basically in love with each other and it’s adorable, and laugh out loud funny. Not to mention, it’ll make you throw your pillows at the tv screen.

Shugo Chara was one of the first anime I watched in High School. The story centers on elementary school girl Amu Hinamori, whose popular exterior, referred to as “cool and spicy” by her classmates, contrasts with her introverted personality. When Amu wishes for the courage to be reborn as her would-be self, she is surprised to find three colorful eggs the next morning, which hatch into three Guardian Characters: Ran, Miki, and Su.

The Guardian Characters aid Amu in discovering who she truly is and help fulfill Amu’s dreams. Amu’s life becomes much more complex, as she struggles to deal with her “would-be” selves. People with Guardian Characters can “chara-nari” (character transform) or “character change”. Each transformation has special powers, mainly for attacking or defending. Character changes have special powers too but have more practical uses. Later on, they recruit Amu as the “Joker” to search for X Eggs and X Characters, the corrupted forms of people’s dreams, so the Guardians can purify their dreams.

Shugo Chara will give you all the feels and remind you of what it was like to be a child again. To remember, before depression, what you wanted to do and be in life.

I’m sure you’ve already seen the pictures for this one. Basically, Umaru Doma is considered the perfect person, but once she’s home, she turns into a lazy, selfish chibi character that just games and watches anime all day while eating snacks and drinking cola. Honestly, she sounds exactly like me!

I just HAD to include Ouran High on this list. When I first watched this, it just captured my attention quickly. Basically, Haruhi Fujioka goes to Ouran High on scholarships while most everyone else is just a rich kid that goes. She goes into Music Room 3 and accidentally breaks a vase in front of the eccentric members she meets there and they make her work it off as their errand boy. I say, boy, because, since she has a tomboyish figure and short hair, they mistake her as a male instead of a female at first.

Which ones were your favorite? What are the best anime series that you would recommend? You can read the full How Anime Helps Overcome Anxiety and Depression, or you might like Inspiring Fairy Tail Quotes Dealing with Mental Illness.

TERRA FORMARS A MOST WATCH FOR ANY STARSHIP TROOPERS FAN

The 5 Best Anime Series (In Our Opinion) 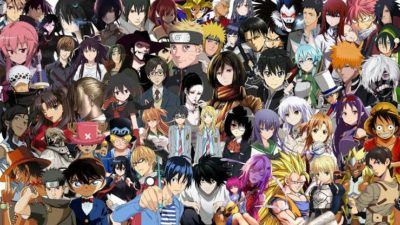