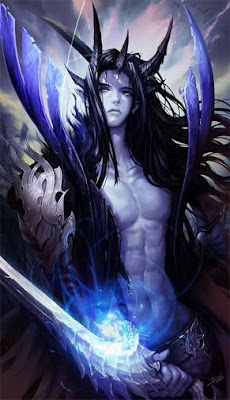 In my head, I already knew this fight was going nowhere, but that seemed like it mattered to no one at this point. Me and Dante where pretty much even with none of us seeming tired at all. A Duskwalker had all the strength and stamina that either Angels or Devils had, but they were complete human. At least to all we know. At certain points of this fight however, he seemed to outmatch me and vice versa. I guess you can say it was entertaining. I looked around me and saw the destruction we both made in this battle. Multiple holes have been made inside the floors of Heaven, countless other Archs have fallen, and pretty much any other type of Angel has fled. Except for me, Elisia, and the All Father.
“Isn’t this great? We have the whole area to fight. Come Tagua, no need to hold back now.”
“I never use my full potential for enemies. I despise killing for no reason.” I geared and spawned my sword back for another round.
“Are Demons and Devils exceptions?” I stayed silent after his question. “I hear no answer, so that must mean yes.”
He charged at me with two shorter blades than mines. The ringing of metal clanging sounded off in the clear skies where we fought. Each time we touched the floor, small holes would form. They grew bigger each time and avoided them as best we could. His swings were precise and sharp, aiming for my body, shoulders, or head whenever he got the chance. Although I would never let him, he would always start on the offensive for some reason. I grew tired of playing defense and pushed him off before moving in quickly and planting my foot in his chest, sending him down into the ground as he crashed into the floor with a bang. I looked and waited as a sword came straight at me at blinding speed. I gasped a bit before moving and dodging it. I felt the blade graze across my neck and blood trickled down my neck. I wiped it on my fingers and looked down. Not once has someone caused me to bleed during a very serious battle. I actually felt surprised.
“I see you dodge just as quick as you move and fight. I knew you were the right one.” his countless spiels were getting annoying.
“What are you talking about?”
“In due time, Half-and-Half.”
Before I could react, a black misty cloud formed over him. It covered his entire body before it vanished as well as he did. The battle was finally over.

A modern day ninja with a collections of swords, You will normally find him with his nose in a book like Kakashi Hatake, watching anime or playing video games. He loves writing and when he isn't he's working on his music or being spider-cop, solving cases for his friends and those around him.

2 SCARY JAPANESE STORIES THAT WILL KEEP YOU AWAKE PART 1