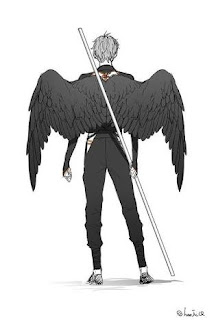 This was a new feeling. I looked down at the newly obtained sword, the wings on my back, how I destroyed the house we were all in. I feel way more powerful, way more stronger, and different. I looked down at all the disgusting creatures that stood before me. Well, trying to stand. They slowly got up and screeched at me. Not like I care at all about how they felt. They all needed to be killed and painfully.
“You damned fallen Angel! How dare you treat us like weaklings!”
“I treat whoever however I want. If you feel like you’re being disrespected, come kill me.”

The leader pulled his sword out and pointed it at me. I watched as the four weaker ones came at me, all brandishing weapons of their own. The Devil in front screeched again and took a slash at me with his claws. I grinned and dodged left easily, barely moving out the way as I drove my sword through its mouth and out the back of its head. The other three stopped and watched as one of their kin fell limp and off my sword towards the ground. The deeper than normal colored blood dripped off my sword as I then flung it to the side, wiping it clean before I turned my eyes towards the other three. They stood quivering but still shot death glares at me. I narrowed my eyes as they all rushed me at once. I moved backwards and dodged the first one before planting my knee in its back and sending it towards the ground. I looked up and saw one more swiping its claws at my face. I grabbed a hold of it and sliced its arm off, hearing a painful shriek before turning him in front of me to take a brutal attack to its eyes. The last Devil watched with surprise as it struck its comrade and killed him. I threw the dead one towards the ground and sliced the one in front of me in the throat, taking its head clean off. I watched coldly at the last one I kicked to the ground. It slowly began to get up, really struggling as I held my hand out and focused to kill the creature. Black, red, and white static lighting coming from my hand before a black ball of energy shot out at the Devil. It struck the creature and exploded into a bright dome of light and electricity. As it died down, I turned around and looked at the leader of the now four fallen Devils. He watched as the attack faded away and then growled at me. I flew down to the ground and landed a good distance away from him. His long black hair flowed along with the violent winds. I look at him and loosened up.

“Who are you?” I asked, flapping my wings once.
“You bas***d! What the hell are you?” he asked, failing to answer my question. Guess I’ll answer his question first.
“I am a hybrid, of both Angel and Demon.” Guess that was the right answer. Because he looks more scared.
“What? Impossible. Angels and Demons can’t have children. You’re lying.”
“Fine, let me show you the power of that creation.”
I spread my wings and tense up my muscle, feeling a force of power building up before I looked over at my enemy and held my sword at my side. He did the same and decided spawn his sword as well, symbolling he was ready for a fight. I flew at him and swung my sword down at him with a wide arc. He blocked my attack, but only barely because he skidded back a whole lot from the force. Significantly weaker.
“Tagua? Tagua can you hear me?” Wait, is that…?
“Elisia?” I said, still going after the Devil standing before me.  I began attacking fast and swiftly, making deep cuts and incisions in his body.
“Tagua! It is you. How are you feeling my love?” Of course she starts with that. Never serious.
“Listen, I’m killing a Devil right now. I cannot talk Elisia.” I told her, sliding my blade deeply into his stomach, getting a strained yell from him as he fell to his knees defeated.
“Well, I’m right behind you.”
I growl and yank my sword up, splitting him in two as I turn around and see her standing a few feet away from me. Her tail swaying behind her normally as her dress fluttered in the wind. She turned to the destroyed house, large craters and multiple bodies I left in the fields. She walked up to me and cupped her hands around my cheek like a child. She stared into my eyes as I stared into her.
“You’re getting so strong.” she sweetly said to me. I knocked her hands off my face and walked passed her.
“You still helping me or not Elisia?” I asked as I stopped a few feet behind her.
“Of course I am. I will always help out my favorite Demon.”
“Good. Because we are going to Heaven.”