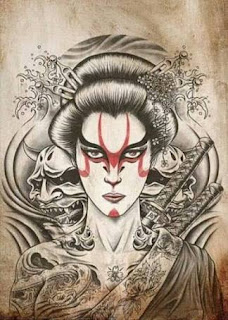 Deep in the Matsubi Forest, a masked man was running just as hard as he was breathing. His footsteps were loud and rang throughout the dense trees with each one he took. He then stopped to hide behind a tree for support and to catch his breath while looking down at a scroll that was tightly grasped in his hand. On the top, the scroll read ‘Defense of Natsuki Village’. Slowly peeking his head out, he wondered if the black clad ninja chasing him had given up or if he had given him the slip. Either way, the sight of him being gone was a relief as he took a deep breath before he stood up and pulled the mask off his face.
“You know, if I hadn’t heard your breathing, I really would have lost you.” a voice came from above him.
The man slowly looked up with fear in his eyes to see the one who had been chasing him for quite a while now. His breathing picked back up as his eyes was stuck on the ninja.
“Then again, I never lose someone who had stolen something precious from Natsuki.”

The thief only got out a short and loud scream before the ninja leaped down and sliced his throat open with a short ninjaken sword. He stood up from his landing and grabbed the scroll before walking away from the now dead thief.
*****
The sun slowly began to rise over the quiet village of Sanahobi. On one of the rooftops, a young girl dressed in red samurai style armor watched as the sun slowly rose over the morning mist. Several birds flew by and chirped as she watched them make their way to their nest. The girl’s black hair was tied into a neat ponytail that ran down her back and her armor. Her brown eyes and stern look on her face showed nothing but full determination as she looked over her village with her sword in her right hand. The young girl was 19 year old Sasume Aoi, a young female samurai in training under her older brother Haru. Sasume wanted to become a fighter for her village because her village never had the adequate amount of protectors for the village and their people. Sasume took up the role and practiced either by herself or under her big brother. At first, many people were skeptical of a female samurai in the ranks, but after proving her skill during an invasion from the Yasumi village, many people began to treat her like any other loyal samurai. She even earned a full title by the name of The Kitsune. Climbing up on the roof behind her, her brother Haru walked over to watched the sunset with her. His hair was black and in a ponytail as well but set higher as his brown eyes held a more determined look behind them. On most missions, Haru would tell Sasume to stay behind and take care of their village until he came back. She hates this, but he tells her that sometimes he doesn’t want to get her into trouble. He calls it a way of protection, but she doesn’t listen and sometimes sneaks out behind Haru and his squad. Sneaking out unnoticed is a huge offense and could lead to serve jail time. The only reason Sasume hasn’t went in yet is because of her brother covering for her and lying to their master.

“Beautiful day, isn’t it?” Haru asked, looking over to her.
“I agree.” she answered back, looking up at him. “It’s always calm before the storm.” They stood silent as the morning bell began to ring, catching both of their attention as they turned away from the sun rising. “You know what our mission today is right?”
“Of course, we got to stay close to each other. Master Kanata said that there are multiple assassins that live and protect that shrine. One wrong move and your head is gone.”
Sasume nodded and walked over and hopped off the roof onto the wooden floor in front of her house. Her brother followed behind her as they began to walk towards the large temple. Sasume looked around at all the people now up and awake was thinking to herself as her brother surveyed the area.
*****
“I don’t care how many there are! Each time we try to get ahead, some ninja come and stop us. Why don’t we just rush in and take them? We have both of the Aoi siblings to lead the charge.” a general talked with obvious fury in his voice.
“That is quite enough Hatoshi.” Master Kanata said with a raise of his hand. “We cannot just rush the tide on this problem of ninjas killing our informants. We must act with caution.”
“Caution?!” Hatoshi slammed his hands on the table in front of him. Kanata looked at him with a raised eyebrow. He hated how his best colleague would not listen to reason. “We are talking about a silent killer that disappears with the night and strikes like the sun at noon. Caution will not work. We attack them hard and fast today while the sun is high.”
“Will you just shut up Hatoshi?” the lady next to Master Kanata spoke up, exchanging stern looks with one another. “You always go against what the master has to say.”
“Because what the master says is just false and deplorable. Maybe he gets his words and actions from someone like you, Orochi. A kunoichi has no place amongst samurai.”
“That’s enough Hatoshi.” Master Kanata sharply spoke. “You can question my words and actions, but you will not throw your disrespectfulness at my trusted fighters. You are dismissed.”
Hatoshi looked around at everyone then scoffed before turning and walking out of the master’s quarter before he turned around and stared at Kanata.
“You should’ve have never became master of Sanahobi.” walking away, Hatoshi met Sasume and Haru walking up the stairs and stood before them, sneering down at the girl in particular as she walked with her brother. “Well, if it isn’t Haru and his troublemaking sister. Going to see the master?”
“We don’t have time Hatoshi.” Haru said as he stared into his eyes. “Step aside now.”
“Oh please yes, whatever you say.” he gestured with his hands as he bowed and turned to the side to let them both go. His eyes then fixated on Sasume as she gave him one last look before heading into the quarters. “You’ll both die slowly.”
“Master Kanata.” Haru greeted, with both him and his sister bowing respectfully.
“Welcome. You may rise.” he ordered, as the siblings did just that. “I supposed you are both here because of the mission I gave you both.”
“Yes, although I still think it should be more than just me and my sister.” Haru voiced his opinion.

“How come? Do you not believe in your sister’s abilities? Master Kanata questioned with Sasume looking over towards him.
“I do, even more than my own, I just find it difficult that you think of us as your most treasured fighters.”
“I don’t.” Sasume spoke up, looking over towards the master with determined smile. “It gives me more confidence that we can complete this mission.” Master Kanata smiled and looked over to Haru.
“You should take more confidence lessons from her.” Haru smiled and patted Sasume’s shoulder before looking back at their master. “Now, onto Satsume Shrine. You will need to be on your toes wherever you step. Many informers of mine who went never came back. Assassins call it a sacred hideout and will not slip up, especially when two unknown samurai come into their lands.”
“I’m sorry for speaking out of line, Master Kanata,” Sasume spoke up.
“It’s nothing dear child. Speak what’s on your mind.”
“You never told us what is for us at Satsume Shrine.” the master then smiled like he was waiting for those exact words.
“Your sharp wits will save you tremendously out there Sasume. Never let go of that.” he praised her. “There are two reasons I am sending you there. One is because of a special artifact that holds the location to a sacred blade. I must have that artifact.”
“What’s the second reason?” Haru asked.
“A ronin by the name of Katsumi lives at that shrine. She knows the location of the artifact specifically and will be your trump card of getting out of that shrine and onto the path of the sacred blade. Find the blade. Find Katsumi.”

Chapter 2 – Feeling the flow of the River

A modern day ninja with a collections of swords, You will normally find him with his nose in a book like Kakashi Hatake, watching anime or playing video games. He loves writing and when he isn't he's working on his music or being spider-cop, solving cases for his friends and those around him.
Articles: 49
Subscribe
2 Comments
Newest
Oldest
Inline Feedbacks
View all comments

Not Another Stupid Dare: Chapter 3