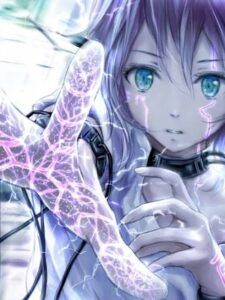 “I’m a what now?” Kayato questioned, looking at the two very unfamiliar women that entered his hospital room.
“You’re a Delta, a human with extraordinary inhumane powers.” the girl with the black hair said. Kayato looked between her and the the blond haired girl before he sighed and closed his eyes.
“Listen, both of you are dressed the part,” he began in a tone that made him sound unsure. “But if I were a person with inhumane powers such as you say, there’s no way I’d believe you.”
“Fine, then believe this.” the girl said in a more announced voice. “Those people who invited you last night were not human.” she watched as Kayato’s eyes widened.

“How do you know about that?” he asked, sounding like the wind has been knocked right out of his body. “How did you see that when I didn’t you? What were they?”
The blond haired girl giggled before hopping on the foot of his bed before she smiled brightly at Kayato who jumped back a bit from her moving closer to his face.
“You have a lot of questions.” she said kindly, almost like a child. “We’ll answer all of your questions, starting with our names.”
“No.” the dark haired girl spoke harshly, turning to her partner with a sharp glare that made the blond hair girl jump. “We were under strict orders not to tell Kayato anything. Our mission is to see if he was badly injured and escort him to our headquarters.”
“Awww, Mizuki is a meanie.” she said with a pouty face.
“Itori…” Mizuki growled before blushing brightly turning her gaze downwards with her hair falling over her face.
“Yay, I got you to say it.” Itori giggled and clapped while Kayato laughed nervously and then heard a groan coming from his little sister.
Everyone turned and saw Tina slowly waking up as she rubbed the sleep from her eyes and turned to see her brother sitting up with a soft gaze at her.
“Onii-chan?” she asked before her eyes perked open and she rushed over and hugged him tightly before crying. “Onii-chan!!”
Kayato was caught off guard before he softly wrapped his arms around his little sister and smiled softly. She cried into his shirt and held onto it tightly while Mizuki and Itori watched as their target hugged a crying girl who looked younger than him.
“Who is she?” Mizuki asked, catching Kayato’s attention and causing Tina to hug closer to his chest to hide her face away from the two other girls.
“This is Tina, she’s my little sister. Well, half-little sister.” Kayato softly stated, looking down at her as she quietly sobbed in his arms.
“Half?” Itori asked, tilting her head to the side.
“Yeah,” he nodded, not taking his eyes off Tina. This topic was always difficult for him. “Me and Tina had separate fathers. I didn’t know mines long because he died at my birth and she didn’t know hers because he left shortly after, leaving her to me.”
Kayato softly sighed as she finally stopped crying altogether,  He never liked bringing up this conversation on their family line, but it was a part of their family that brought them together even closer than before. Every time Tina would smile at her big brother, she would feel more safe then she ever felt before. Kayato always catered to his little sister. Even now, when something as huge as this hit him in the moment they all were in now. He turned around and slowly stood up with Tina in his arms.
“I’m sorry, but there is no way I am what you say I am.” he apologised, turning his gaze to Tina once again. “I have a life to live and someone to look after.”
They both smiled at each other while Mizuki and Itori was left standing silent. They watched as the siblings walked over to the door and proceeded to walk out the room.
“Have we failed, Mizuki?” she asked, watching as Kayato grabbed the door handle and turned it.
“Not quite.” the black hair girl smirked.

Upon opening the door, Kayato and Tina looked up and saw Kisama staring at them with an upturned gaze at them both. Kayato’s eyed slightly widened while Tina moved behind her brother.
“Kisama, you found us!” Itori cheered.
“Why is he leaving?” he asked, his tone deep and held a sort of darkness behind it. Him and Kayato starred at each for a while before Mizuki walked and stood beside the tall man.
“He didn’t believe us, even when we told him that we knew about last night when three Omegas attacked him.” she informed, starring at Kayato intently. “I don’t know what you see in him, but it must’ve been a flux.”
“No.” Kisama said loudly, making everyone jump as he tightened his fist glared at Kayato, persistent to bring out the powers the boy held within him. “If he won’t believe through a simple explanation, then maybe something more drastic is in play. Mizuki.”
The girl smiled as she moved forward and punched Kayato straight in his chest, red electricity ran throughout his body and attacked his nervous system. He was blasted off his feet with a sharp yell as he crashed against the wall and cracked it severely.
“Kayato!!” Tina yelled with tears in her eyes. She tried to run towards but was stopped as Kisama grabbed her arm and pulled her over to him. “No! Let me go!”
“Tell him where I’ll be.” Kisama grimly said before disappearing in thunderous boom of black lightning.
Kayato slowly tried to pry himself from the wall, his entire body feeling like it was on fire as a sharp, continuous pain travelled throughout his body. His vision was wavy as he made out Mizuki walking over to him and kneeling down with a grin at the boy who seem very disoriented.
“I think you hit him too hard Mizuki.” Itori said worriedly.
“Nonsense, if Kisama really is true about him, this shouldn’t affect him at all.” Mizuki stated knowingly. “Hey, you still there?”
Kayato groaned as his eyes wavered around the room. His hearing was nothing but a high pitched noise in his ears that continued steadily for a few seconds before all his sense focused and his eyes landed on Mizuki who moved closer to his nose.
“Are you awake now?” she asked before Kayato punched her in the nose, sending her flying across the room and through the door of the room.
Itori watched as her mouth stood open with as Kayato stood with a light blue electrical aura surrounded his body. He looked down and saw his right hand radiating with sharp bolts and sparks that traced and licked off his fingertips. Mizuki then stood up with a small trail of blood running down her mouth and smiled with a deep glare.
“It seems it wore off quicker than I thought.” she said, breathing a bit heavy.
“I don’t know who you people are, but I do know this.” Kayato said, forming his hand into a fist as more electricity spewed out from his aura. “You don’t dare mess with me or my family!”

A modern day ninja with a collections of swords, You will normally find him with his nose in a book like Kakashi Hatake, watching anime or playing video games. He loves writing and when he isn't he's working on his music or being spider-cop, solving cases for his friends and those around him.
Articles: 49
Subscribe
2 Comments
Newest
Oldest
Inline Feedbacks
View all comments