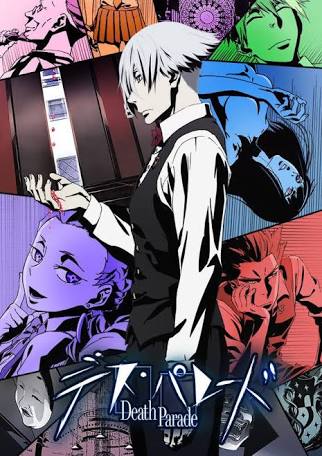 Death Parade is a twisted, dark, and extremely frightening take on the afterlife and judgement day wielding powerful animation, incredible suspense, and some well-executed twists and turns.

Death Parade is an extremely effective horror anime for many reasons. Firstly, one of the traits that makes this show stand out is its extremely frightening premise. The anime is set in the afterlife and involves beings known as arbiters or emotionless characters whose job it is to judge people’s souls through a series of games in order to determine whether or not their souls should be casted into a void or be reincarnated.

This premise is extremely freighting but also well executed as the show focuses on episodic arcs involving pairs of characters who are in this realm because their souls and life decisions place them on the verge of being voided or reincarnated. When the games are occurring, the writers effectively make these events and sequences very intense but also very unpredictable.

These twists effectively keep you on the edge of your seat.  The themes of the show are also effectively frightening as well as a good part of the show focuses on the methods of the arbiters and challenges the viewer to question how effective these types of methods are and how people should be judged in these situations, and what constitutes as a morally good or bad soul.

For most of the show, I was left questioning at least a few events where I thought the arbiter made a wrong decision or had flawed methods for judging souls and for the most part, I would assume many viewers would be faced with similar thoughts as well.

The idea of seeing the arbiters make wrong decisions because people can be far too complex when reacting in some situations was especially interesting and frightening.  Most of the side cast in this show comes and goes but another well-executed aspect of Death Parade were the interactions between our main characters Decim and Kurokami.

Kurokami is the one soul who the arbiter Decim cannot judge and she stays around  as a case study who attempts to see through people’s emotions and question Decim’s judgements directly.

These interactions are very real, but also very interesting as we see Decim’s logic contrast with Kurokami’s emotional studies of people very frequently. The writers also do a great job using these conversations, debates, and interactions between Kurokami and Decim to continue to fuel the debates and conversation about what constitutes as a good or bad soul.

Death Parade is not for the faint of heart as most of the show’s themes are extremely dark and twisted and while it may seem episodic at times, if you are a fan of horror anime or are curious to see a show with some frightening themes this anime is for you!