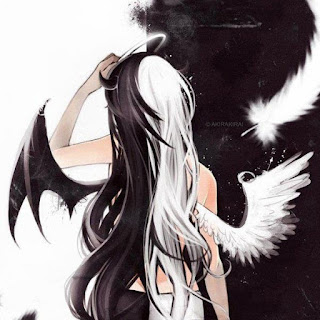 I don’t know how long I’ve been knocked out. More so, I don’t even remember how long it’s been since I took an attack like that. My eyes slowly opened as I search my surroundings. I slowly sit up and wince as I instinctively grabbed at my chest. I looked down and saw that my wound was…healed? I never had regeneration properties in my body, nor did I ever want it. I sat upright and felt the heaviness of my wings. I turn to look at them and they appear black and decrepit. I try to flap them, but they fell back down with a heavy thud, like the feathers wasn’t even there. I then did a double take as I realize I was sleeping on a bed. There were no comforters which means I was just laid here to rest. There was a pillow behind my head, which was a relief in my case because my head is hurting like hell. I then felt another presence in the room as I looked down and saw Skylar sleeping below the bed, looking as peaceful as ever. This doesn’t make sense. I was suppose to be dead, with a gaping hole in my chest. I was suppose to be floating in a bed of water and tall grasses. I was suppose to be…
“Oh, you’re awake.”
My thoughts were soon interrupted by a very feminine voice by the door. My eyes snapped over to her as I narrowed at her, practically death staring this happy looking woman. Her was as black as my feathers with rosy cheeks to complement her face. She wore a bright smile as she poured a cup of water and got a towel out of a blue bowl of water. The most interesting thing about her, was her red eyes and dark colored dress. It was awkward, her smile made me upset, but her dress color and eyes calmed me down. What the hell is wrong with me?
“My mother and I found you in the swamps. Even though you were far away, we managed to bring you back here with your little wolf friend. She’s very nice.” she spoke in a high toned voice. Why was it so damn happy? It’s irritating.
“Where is this place?” I asked, looking down to Skylar. “Why did you help me?”
“You are a Angel, are you not?”
“I’m an Archangel.” I snapped at her. “Be careful with your words.”
“An Archangel who was defeated by the strongest Duskwalker ever to enter Heaven within a thousand years. Tell me, are you still prideful Mr. Tagua?”
This woman was really starting to piss me off. I jumped out of bed and then instantly fell to the floor with a loud yell in agony and pain. My teeth gritted hard as ever as she walked over to me and kneeled so her face met mines. I didn’t know anything about her, but as fate would have it, it seems she knows a lot about me. The fact that I never met her is a problem in my brain. I told myself I would figure all this stuff out later, but now my only thought were how I was going to get back to Heaven and how would I kill the bas****d who made me fall from grace. The pain was beginning to subside so I stood in front of the woman before an older woman walked, dressed just like the one in front of me. We’re they twins? No, I don’t think so.
“I see our hybrid friend has awoken. Welcome to our house Tagua.” she greeted wisely.
“Can you both tell me how you know of me?”
“We know everything about you Tagua. From your rise to your fall, we’ve been watching you.” If it wasn’t for her voice, she would’ve been crazy in my eyes. But no. She held a certain…wisdom inside of her.
“Would you like us to help you, Tagua?”
“Fine, tell me what you know.”
*****

For several days, I’ve been spending my time healing from my fatal wound. I don’t know what weapon that Duskbreaker used, but it seemed to injure Angels and Demons very well. I look at my wound everyday before Tanya, the youngest one, told me to not worry about it. She said it would make me stronger as well, which I do not believe. Tina, the older one, told me that if I wanted to get back at those in Heaven now, I would need to listen to her and Tanya.
“What do you mean that Angels and Demons have forms?”
“It’s true, and it always has been. For example, an Archangel is a permanent form for Angels that obtain by the All Father once they have proven themselves a warrior of high caliber.” Tanya spoke
“So, is it the same for Demons and Devils?” I asked, sorta intrigued.
“Very much so.” Tina answered, catching my attention. “I’m sure your father could agree very well with my words.”
“My father was a disgusting and hellish creature that needed to be put down.” I stated coldly.
“So you deny that part of you?”
“Mother, please don’t.”
“You would completely ignore that side of you that has much greater strength than your mother’s side?” I slammed my fist into the table in front of us, causing a loud crash noise and for Skylar to wake up. Something inside me was boiling as I hanged my head down.
“Watch your tongue. I loved my mother way more than my father. All I got from my father was rage. A consciousness without understanding what the hell it does until it’s too late.” I spoke at her, staring her dead in her red eyes.
“So, what did you get from your mother?” Tanya asked softly.
“A reason to live.” I answered, keeping my head down of what was happening to me.
“Tagua,” I looked up to the mother, making them both see my red eyes before Skylar came over and sat next to me. “Do you realize this? As a Angel, you are strong and caring, but as a Demon, you are strong and ruthless. Something that Duskwalkers are known for. To call you strong, would be an understatement.”
“You can take forms of a Angel and a Demon.” Tanya joined in again. “Even mix them together.”
I took in everything they said, yet my eyes stayed red. I have the strength of both sides of war, yet I only look up to one. I didn’t know what to say at this point, but I trusted them with everything I know about Angels and Demons. Heaven and Hell weren’t ready for something like me. A monster of both realms sounds like a real threat.
“I trust you both, but I have one question.” I said, sitting up with a easier look on my face.
“What is it?” Tina asked with a small smile.
“What do you both know about Futura?”
They both went silent. They took a quick glances at each other before Tanya stood and walked to a bookcase. I began to wonder as if I hit a nail on its head with that question. I may be fallen, but I still remembered what the All Father has trusted me with. I closed my eyes as the words he said to me played on in my head.
‘I trust you to find Futura. Bring it back to Heaven to re-establish our prosperity.’
I used to think there was no way a single Archangel could travel between dimensions and get back an ancient artifact by himself.
“What do you know about Futura?” Tina asked as her daughter came back to us with the book in a page with opened at the full description of this legend.
“Nearly everything, what it is, what it does to the land it resides in, and who created it. The All Father taught-” Tina then held her hand up to stop me from talking.
“The All Father feeds his Angels lies about Futura. There are three realms that wants Futura. Can you guess what they are?” she asked in a serious voice.
“Heaven.”
“One.”
“Hell.”
“Two.”
“And Fortana…”
“Very good Tagua. You really do know your history of our world.” Tanya praised with a small clap towards and an easy smile. This doesn’t make sense though. Why is she asking me these questions?
“Incase your wondering,” Tanya started again. “We are asking you this questions because we need you to remember this when you start battling both Heaven and Hell for Futura. It needs to go back in its rightful place in Fortana.”
My eyes widen a bit before a loud crash and explosion was heard at the front door. Smoke and debris flew pass us as five winged men came in and attacked both Tanya and Tina, sending them flying through the walls of their house. They all had wings black like mines, yet they resembled that of bats and not angels. Devils, lowest of the low. Their leader came in. He wore a long black coat and black pants with no shoes on and a long katana like sword.
“Man, this place is a pigsty. I think we over did it again boys.” they all laughed before they turned to me. “Ehhh, what’s a fallen angel doing here?” he then grabbed my hair. Big mistake.
“I’ve been waiting.” I said, my head still hanging low.
“Oh really?” the leader laughed manically. “Waiting for what?”
“Your death.”
I extended my wings out fully. One of them started to feel lighter then before. A black and white aura began to waver around as I yell and push everyone and everything away from me, exploding the house from my presence. From my hand, a black edge sword extended fully as I gripped it in my hand.
“It’s time for Heaven and Hell to fill my presence.”

2 SCARY JAPANESE STORIES THAT WILL KEEP YOU AWAKE PART 1