Most anime fans have heard of Elfen Lied by now. It’s infamous for it’s twisted, dark humor and is filled with nudity. I mean, the first five minutes of Elfen Lied is LITERALLY of a naked woman slaughtering people. But, despite that, it does have some deeper messages such as accepting yourself and your inner demons. 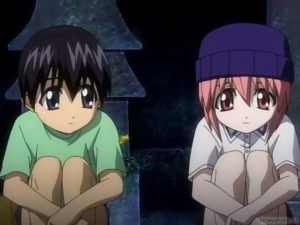 Elfen Lied is something else. Definitely not your typical anime. Elfen Lied is not something that you want to enjoy a sunny day with. The violence and nudity may put some people off of this series, but I have to say that the story would not have the same impact without it.

We have a young woman who has just escaped from a high-security government facility, where she was apparently held against her will. And it is quite obvious from the brutal massacre that ensures that she is a very troubled individual with plenty of hate for the human race, and perhaps deservedly so. Then after she is essentially shot off of a cliff by a sniper under the direction the director of the facility, she ends up on the shore of the beach where she runs into Kohta and Yuka. Still naked.

And this is where the story starts to disappoint me. The writers of this show then decided, after creating such an interesting character, they needed to turn her, through the ever-so-convenient plot device of memory loss, into some sort of mentally challenged child with the body of a young adult who can only utter the phrase “Nyu”.  And she has horns that suspiciously look like cat ears. Soon after, more girls come to join Kohta’s new “family” and yes, you get to see most of them naked. 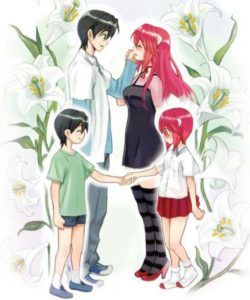 Besides what’s going on in front of the viewer’s eyes, there is an ongoing plot in the background about the Diclonius race. I actually found this plot pretty intriguing as well, but it, unfortunately, takes a back seat to the character drama, which was… somewhat disappointing.

Still, we do have a few moments and scenes that make the show worth it. Most of us can relate to Lucy in her moments of wanting to forget her past and just be a normal, human girl. While most of us(probably) don’t go around with a split personality killing people, we DO still want to be and feel accepted for who we are. 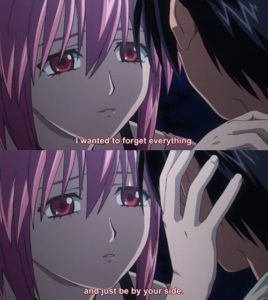 What About the Characters?

This is where I had my biggest bone to pick with this series. Most of the characters came off as either unrealistic or came off as pathetic excuses for fanservice. And the relationships were sometimes a little too forced.

Especially note the latter; relationships. It’s an important aspect, as they are the main factor to why the Diclonius are so “cruel”. “Cruel” because they aren’t the real cruel ones; that honor goes to the humans. 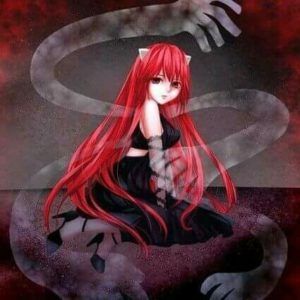 Kohta is pretty much your typical harem anime protagonist.  He does offer some depth, but he is also unrealistic. I don’t expect fictional characters to act like real people, but they need to have a certain amount of believability. Any sane, real human being would turn in a lost, naked girl to the police. Not to mention, give a girl pants if she is obviously lacking some. 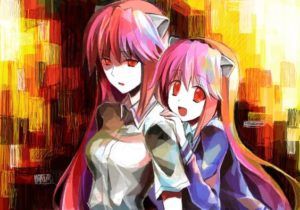 Yuka is… well, Yuka is the kind of cousin who wants you. Really badly.  She is content with longing for her wimpy, pushover of a cousin. I’m sorry, but why was this needed in the story, especially when there was already a love interest for Kohta? This part really bothered me. I would have enjoyed Elfen Lied more if they let this part out.

Lucy, on the other hand, was the meat of the story and, at least in my eyes, was much more of the main character than Kohta could ever be. I thought the flashback to her past was really well done and I admit I did feel sorry for her, even if half the time she was a sadistic murderer and the other half what amounted to a naked child. 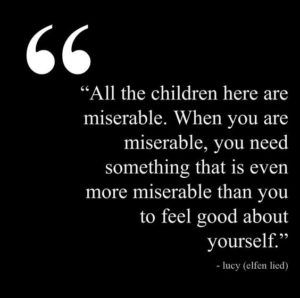 Now, did I enjoy this series? On occasion. But it was very hard to watch, and I only kept watching because everyone else seemed to think this was some sort of masterpiece.  And the fanservice was so over-the-top that it was gross. I really don’t need to see naked fourteen-year-olds, and even when the fanservice involved older characters, it wasn’t very tastefully done and was way too overdone.

What did you think? Have you already watched Elfen Lied? Are you a fan or no? Let me know in the comments below!

Spends her time watching anime and reading anything she can get her hands on. Also passionate about Disney, Harry Potter and helping those with depression and anxiety.
Articles: 130
Subscribe
0 Comments
Inline Feedbacks
View all comments