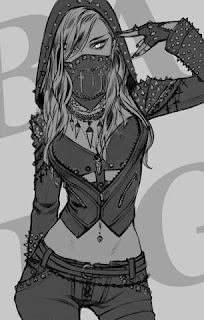 A new day has begun in Helmlond. Citizens and merchant got out to begin their days off to a nice and quiet start just as the sun was rising over the town. Walking towards a small hut on the side of the main road, a woman wearing a long pink floral dress and a white apron walked towards the door of the hut with a key in her hand. Her hair was orange and tied into a net bun with soft green coloured eyes. After opening two windows to let light from the sun into her shop, the woman walked over to her front door and held the door open with a small stand at the bottom. Knowing the day was early and no one was actually up, the woman walked back into the shop and tidy a few things up. Right across from her building was a dark alleyway with garbage and puddles on the floor. Inside, a man wearing a black dark cloak and clothes and a small dagger on the side of hip. He watched the woman inside the shop with his malicious brown eyes. A noticeable scar under his right eye was in the shape of a slash as he pulled a grey coloured mask over his mouth and nose. Stepping out, he walked straight over to the shop and walked inside, his black boots announcing him as he stepped on the wooden floor. The woman turned around and smiled at the man who walked in. He took his cloak off and revealed messy blond and a small smile which she took as friendly.

“Hello there.” the woman said, coming from around her counter. “See anything you like?” the man smiled and gave a small shrug.
“It depends,” his deep voice had a hint of interest in it. “What do you have in store for a husband’s wife whose into arts?”
“Ooh, so it’s a gift for the wife?” the woman questioned, getting a small chuckle out of the man.
“Tomorrow is her birthday and i want to giver her something i know she will love.” he said with a slight blush, his words sounding sincere and true.
“Then i have just the kit for her, follow me.”
The man smiled and followed the shopkeeper into a backroom. Turning the light on, he saw another of the shop that was accessible to other shoppers. He looked around and saw a small safe that she had embedded into the wall. Placing a hand on the handle of his dagger, he readied himself but then let go of it as the lady handed him something. Holding his arms out, he looked to see it was a professional arts and craft kit for someone who has been doing this for a while. He looked up to her and smiled with a nod.
“This is perfect. She’s going to love this.” the man said just as they both heard another customer walk in the store.
“Excuse me please.”
Letting her go by, the man quickly made his way over to the safe in the wall and prepared to take its contents out. He placed his dagger between a small slit between the door and surrounding wall. He got it open with a slight clink noise. He looked up to see if she heard it. After knowing she didn’t, he grabbed the multiple bags of coins and placed them on a loop on his belt and hid them with in his cloak. After closing it quickly, he got up and grabbed the pack back and waited for the shop keeper who came back shortly after.
“Sorry about that.” she apologised.
“Don’t worry about it.” he said, looking down at the kit again.
“So, you’re ready to checkout?”
“Yes, I am.”
Taking the item with a clap and a small hop, she led him back into the main store where he saw another customer. A young looking girl with long brown hair, dark green eyes, and wearing a yellow and white top with a brown short skirt and sandals. He narrowed his eyes and silently took out his dagger. He quickly pulled his cloak and mask over his face as he slid the small blade into her back and covered her mouth. The woman quickly dropped the kit on the floor and slowly closed her eyes as the man let her fall as well. The other customer looked over and screamed as her eyes widened. The man looked over to her and hopped over the counter and gave chase as they ran outside. He caught up to the young girl and pushed her down on the ground.

“No! Please don’t kill me!” the young girl cried out with her eyes closed and tears streaming down her cheeks.
The man got ready to kill the girl as well before a crowd of citizens stood around and watched the horror unfold right before their eyes.
“Hey you!”
Looking up, he saw two guards running at him with their weapons drawn. He gritted his teeth and hopped off the young girl, running back into the alleyway. He stopped right above a sewer opening and looked to see both guards helping and checking on the young girl. He sneered and went down the manhole and closing the lid soon after. Both guards ran over in the alleyway and looked down at the sewer cover.
“We need to tell the higher ups about this.” one guard said.
Looking back down at the cover, the symbol for the Smoke Dagger Clan was painted on top. Both guards knowing that they had started again.

In the main council building of Helmlond, a meeting was taken place before an audience who heard of the event. Many of the civilians and townspeople were chatting among themselves while the guards of both Helmlond and Edonia was standing near the main stand where the leaders of the meeting would be seated. Mikal was among them as his commander thought this would be a situation where he could kill two birds with one stone. Mikal was supposed to make sure no one harmed Lady Sitau or any members of the council. His second objective was to learn of any knowledge about the Smoke Dagger’s intentions or plans.
“Man, it’s pretty crowded in here.” Lukas leaned over in Mikal’s ear.
“Also noisy.” Mikal added, looking over at the many chatting and panicked people. “Maybe they really are they terrified about what happened.
“Yeah, I can understand.” Lukas stood back in his position, looking over to the empty seats of the council. “I wonder how they must feel about this. They pretty much run Helmlond.”
“All rise, for the council has arrived.” a guard up front announced, silencing everyone as they all stood. Six members including Lady Sitau all walked in from a door that was behind the main stand. The audience then sat down as the council also sat down. Lady Sitau looked before the meeting has began.

“Around the morning time, a dark cloaked man has killed, robbed, and attacked two women. One of them tragically died and the other survived. Two of our guards stopped the bandit before he could kill the second. Upon escaping, they have reported to my team of fighters that a symbol was marked on the manhole cover he escaped in. The symbol was of the Smoke Dagger Clan.” the whole audience went into a complete stir. Mikal and Lukas looked at each other as the crowd has gotten louder.
“Why hasn’t your so called guards been patrolling the area then?” a man jumped up and yelled out. “You could’ve prevented that death if your people was on a better watch out.”
“With all due respect, sir, our guards are never off duty. Even during the night, our men and women are always on the watch.” Sitau answered the man, her words full of grace.
“And look at what they have achieved.” he mockingly said, putting his hands on his hips. “Yet another event to scare us into our homes. We might as well let the bandits run into the council buildings and take control.”
“You watch your tongue, commoner!” Judge Harmon said, a secondary council member who was Sitau’s informational reporter. “You have no right to state how this town’s council system shall work.”
“Mr. Harmon, please quiet your voice.” Sitau said, both men quieting down. “We understand how many citizens of Helmlond are frightened about this group. It is a hassle for us figuring it out as well.”
“So, what will we do?” a woman spoke up softly.
“A small team under Commander Wilton has came in from Edonia to help us with this issue.” the crowd began to chatter again, but this time in amusement. “Tonight, they will send a small group of five to six men into the sewers to find that bandit as well as search for whatever else they could report in.”
Mikal and Lukas smiled proudly at their team being mentioned in this conversation. They put their helmets back on as the meeting began to come to a close. A few minutes went by as there were more people out and about than before. Mikal and Lukas walked back to their hideout together, chatting about tonight’s raid.
“Man, I’m so ready about tonight. This is going to be our first chance into helping Mejor.” Lukas said, pumping a fist into the air.
“I know how you feel. My heart is racing as well.” Mikal added on. “Tell me Lukas, is there anyone special in your life?” Lukas looked over and then looked up at the sky.
“Well, it’s nothing serious, but there is someone.” his voice was a bit toned down then before. “Her name is Vanessa Flowermaiden. I just met her when we came into Helmlond.”
“That’s lovely.” Mikal complemented.

Deep in the night, the lucky six men he had chosen was the one that had either little or no experience in the field. This was their very first adventuring mission where they will be using their weapons. They were all in the main room along with Commander Wilton for briefing.
“Alright, this is what we came here for. We got permission to go into the sewer system and find this killer that thinks he and his clan can terrorise Helmlond.” the men cheered for a moment before letting their commander talk again. “Each team will be split into two groups of four. I will lead one team and the other team will be led by Althia.”
“Alright, let’s get this show on the road!” she loudly stated, her toothy grin once again showing.
“Lukas, Mikal, and Antania will go with Althia. The rest will go with me.” everyone nodded. “Let’s go.”
They all walked out and went into the alleyway where they saw the sewer entry. They lifted it up and all crawled down and closing the lid shortly after. Their search has begun.