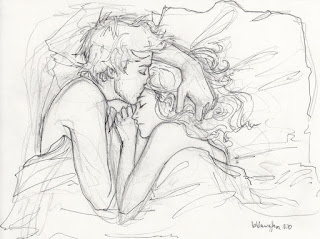 After the festival and everyone has cleaned up and went home, Mikal and Lilian woke up in their new home in the main city of Kremvor. Once again, Mikal was woken up by the sun rays piercing through the shades in their room. His eyes squinted a bit more before slowly opening and looking over the cream colored walls of the room. He then heard a small moan like noise then a tug on his chest before turning his eyes over to his wife’s beautiful face. Her eyes were closed as her lips were slightly parted, her body rising and falling slowly with her soft breathing. Mikal smiled softly and moved a strand of hair from over her eyes and planted a kiss on her cheek, remembering the inspiring words she gave to him on the very important night.

‘I’m so proud of you, Mikal. Make the king, people, and the world safe.’   Mikal kept those words to his heart after Lilian said them. He looked over to the suit of armor, helmet, and sword all given by his new commander when he goes on missions and adventures.  King Windor then told Mikal that he will meet his new commander today after he got associated with his new home and everyone was helpful in the area. Lilian then rustled under the covers a bit before she woke up and turned her eyes to see her husband smiling down at her.
“Hello, my strong Knight.” she calmly greeted.
“Did you get a goodnight’s rest?” Mikal asked, taking her hand into his.
“Yes I did. I had you to keep me warm and protect me of course.”
Mikal smiled and chuckled as he kissed his wife and took her body into his arms to hold her during their intimate moment. Kissing him more deeply, Lilian then placed her hands on his chest before pulling away slowly and opening her eyes to look into her husband’s piercing gaze, blushing as she felt dominated by his eyes alone. He smiled and brushed her cheek with his thumb in slow rotations.
“You always were easy to make blush.” he said knowingly. Lilian blush became brighter as she planted her face into his chest.
“You’re just making it worse saying things like that.” Lilian whined, holding onto him.
He then giggled and held her up, looking at her face.
“The king told me I have to look around the castle and the town of Kremvor before I meet up with him and my new commander. Want to come with me? It could be fun.” Mikal suggested to Lilian who looked down in thought before turning back up.
“Yeah, sure. I could probably find a decent working place as well.” she spoke with a happy tone.
Together, they both got dressed and ready to head out. They walked out of their room and made their way to the castle entrance and met Thiaus along the way.
“Good morning Thiaus.” Mikal greeted.
“Good morning, you two. Mikal, congratulations on becoming a Knight for King Windor. I trust you will do him some excellent deeds.”
“Thank you, my friend. I hope I can do some good for Mejor as well.” Mikal said, shaking his hand before he turned towards Lilian.
“And congrats to you to, Mrs. Angelheart. You now have a very strong and protective husband.” Thiaus congratulated Lilian as well as praise Mikal.
“Thank you very much, Mr. Goodwin.” Lilian nodded proudly and took a glance at the books Thiaus held in his hand. “Going to your new study room?”
“Oh, yes I am. King Windor was even so kind as to let my assistance back in Hucus to stay with me, so now I have everything with me to aid the king with new findings in Mejor.” he proudly stated. “Well, I must be off now. You two have fun looking around the city.”
“See ya later, Thiaus.” Mikal waved off before he walked out with Lilian, looking at the bustling amount of people walking around the place. “This is our new home.”

In his throne room, King Windor stood at his window, looking down at his kingdom before turning around to see a man in a suit of armor darker than usual. His hair was messy and blonde with a few locks of it falling over his dark green eyes. and a serious look on his face.
“This is a great day, Sir Willton.” the king said as he sat on his throne. “We have a new Knight with us, all the destruction from the Orcs has been cleaned up, and we are now ready for our men to go back out into world again to see if there is any dangers threatening humanity in its tracks.”
“Yes, Your Majesty.” Willton smiled and bowed respectfully towards the king’s words. “If you don’t mind me asking, where is that new Knight that you have accepted into our ranks?”
“Right now, he should be venturing out in Kremvor with his spouse.” Windor answered with his cheek resting in the palm of his hand. “I told him to get affiliated with our nice and protected environment before reporting to us. Don’t worry, I actually already have a mission for him when he returns.”

Willton nodded and began walking out of the throne room, leaving his king to think quietly by himself. There were many situations that Windor thought Mikal could handle. Although it was hard to choose to one, he wanted to make sure that he would get great results out of his new Knight to see what he was all about.
“I guess I can send him to Helmlond. It would be a great start for him, and a way to get rid of those annoying thieves messing with the citizens and Mayor Sitau. She will be very pleased with us sending him there.”
As Windor came to a subtle conclusion for Mikal’s first mission, his throne room door opened to reveal a bright young girl and a mature looking woman. The young girl, who ran straight for Windor’s arms had dark red colored hair and yellow eyes that obviously came from her mother. Her hair was tied in a neat ponytail with a black bowtie keeping it in place. She wore a long pink dress with white buttons and little bowties that matched well with the white slippers she had on her feet. As he looked up from hugging the little child, Windor spotted and smiled softly at the woman walking up the steps in front of him. Her hair was tied in a neatly done bun with a few strands of hair running down the sides of her faces. Her dress was a little dark, a purple with black buttons and no bowties that complemented her maturity well.
“Hello Father.” the little girl spoke cheerfully with a wide smile on her face.
“Hello, my dear Emily.” he greeted back, kissing her cheek before turning again to the woman now beside him. “Didn’t I tell you to announce to the guards when you were walking through the castle?” the woman smiled knowingly and leaned down to kiss him quickly.
“And I also told you that I wield magic to protect our daughter incase you’re not there.” she retorted, giggling softly.
“A crimson sword and world bending magic. What could come between us?” Hiyadus asked himself while looking at his daughter.
“Nothing as long as we stick together.”
The three smiled and in silence until Emily hopped down and stared intently at her mother and father with wide eyes.
“When am I going to see the new Knight, Father? I really want to see him.” she eagerly stated.
“Is that the reason you both came here?” he asked with a small chuckled. His wife smiled and chuckled as well as how cute their daughter was being.
“Pretty much.” she answered. “She was having so much fun and was so excited about another Knight coming to Kremvor that she almost didn’t go to sleep last night. I had to sleep with her to make sure of that.”
“Well, that makes sense. Don’t worry sweetie, stay here long enough and I am sure you will see him. I told him to report to me after he had a look around town.”
As if on que, Mikal and Commander Willton came through the double doors along with a few other men in armor, all looking ready for whatever mission their king had in store for them. They all stopped at the foot of the stairs and placed their hands over their chest.
“All Hail, King Hiyadus Windor.” Willton announced before all of them bowed on one knee.
“Arise my Knights and Paladins.” Windor ordered. “Sir Mikal Angelheart, I’d like for you to meet my lovely wife Aileen and my wonderful daughter Emily.”
“It’s a pleasure to meet you both.” Mikal bowed and nodded.
“Likewise,” Aileen greeted back. “Our daughter has been dying to meet you.”
“Really? Well, I’m flattered.” Mikal acknowledged the little girl smiling brightly before him. “I hope to make you and your family proud, Miss Emily.”
The child giggled before hugging Mikal and then running back over to her parents as Windor stood and walked down the steps and stopped at the bottom in front of all the men.
“Listen men, as your first new assignment into Mejor, you all are to go to neighboring town of Helmlond. There has been a breakout of thieves and miscellaneous activities. Go there, see if it’s part of anything bigger.”
“Yes, King Windor.” Commander Willton answered.
“Glory to Edonia men.”
“Glory to Edonia!”
After saluting, Willton and the rest of his men went to go prepare for their new assignment. Mikal was happy and just as eager to go out into the new world. . King Windor and his family watched as the team walked out the throne room, ready to start their new adventure.

Way of the Blade: Chapter 3 – Dancing of Blades