I’ll go ahead and post a disclaimer here that this post contains triggers for those with depression and other mental illnesses. Mental Illness isn’t something that is talked too much about openly. It’s more taboo. You’ll read about it on Reddit, Buzzfeed, and Tumblr. You’ll see articles about it on Pinterest. Rarely though, does anyone openly tell their surrounding peers…”I almost committed suicide.”Or maybe “I’m having dark thoughts.”

We ALL have someone better off and worse off than ourselves. That DOES NOT make our pain any worse. Yes, I know that there are people starving to death and getting the crap beat out of them. And my heart hurts for them. It really does. But that does not make my mental illness any less. You can’t truly relate until you have felt that overwhelming, empty and almost calming desire to end your life.

It’s easy to learn to depend on objects at the cost of ourselves, leaning on the things we own to weather the times alone. Smartphones are one of the best metaphors for each of these problems.  It can be hard to find a way back to real life, through so much noise and the delusions of knowing and closeness. 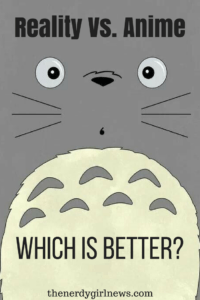 After being diagnosed with PTSD, I started talking with someone about it and she was amazed that I was as high functioning as I was. Well, in part it’s because I had, and still do, a great support system that helped carry me through. They would love me on the days I couldn’t love myself. I wouldn’t have a good day or even try too.

As I’ve mentioned before in How Anime Helps Overcome Anxiety and Mental Illness, Anime gives depression the visual to mirror the destruction it can cause in real life.  I create new worlds every day to make sense of my depression, and by doing this(fanfiction) it relaxes me and let’s me take out my fears on paper instead.

I was writing fanfiction before I even knew what it was. The feeling of taking such vivid characters in all of these animated worlds and putting them in any situation was thrilling and yet still relaxing. Books and writing let me escape the world that always seemed so cruel. As an HSP(Highly Sensitive Person), I can’t even hear someone being criticized without cringing and sometimes even tearing up.

This was my escape. But I still had to live in reality.

The truth of it is that reality can usually suck. But the anime worlds aren’t always so peachy either. I mean, can you imagine living in the world of Attack on Titan, or Sword Art Online?

I would be dead by the first episode…

At least in reality, I can escape back home when I need too.

Which do you think is better? Is there one that you would prefer to live in? I would LOVE to be in the world of Harry Potter(minus Voldermort, of course) or Anime-wise…Miraculous Ladybug(surprise, surprise).

Let me know in the comments below!

Spends her time watching anime and reading anything she can get her hands on. Also passionate about Disney, Harry Potter and helping those with depression and anxiety.
Articles: 136
Subscribe
0 Comments
Inline Feedbacks
View all comments