This is the second part of our Yo!D1O1 horror stories series. Here are some scary stories that will make you realize that children probably shouldn’t have imaginary friends and something’s aren’t meant to be said out loud 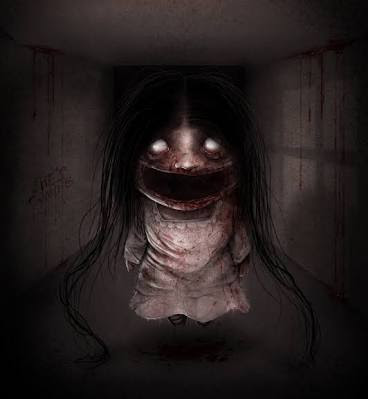 When I was 9 years old, my mom and I moved into a large colonial house that was built in the late 1800s. My mom always had a weird feeling about the house. There was a little bricked off section in the basement and we never knew why it was there.

My mom worked as a nurse at the hospital which was pretty far from the house so she couldn’t always be around. It was during the time that I made her up .On one of my moms brief visits home , I decided to tell her that I had been playing with Jenny my imaginary friend. She thought that it was just a phase I was going through, so she didn’t pay much attention to it. I took the opportunity to tell her that Jenny wanted me to let the cat go down into the basement so that she could play with it. My mom agreed allowed me to let the cat go down there. Up until then jenny had asked for small things which she had never returned. A couple of days passed and mittens didn’t return.

My mom finally comes home on a leave form her job, so we spend the whole day together, after a while of chatting she asked me about my imaginary friend but I don’t really know what she looks like she is always burled when I saw her around the house you could only make out that she was a little girl ,” me and Jenny don’t talk that much, since you went on leave “

I woke up and found myself in the basement in the dark with only a dim ray of light shining from the unfitted basement door I panicked and rush towards the door but the door nob won’t burg , then I spotted something moving in a corner of the room it stopped for a while then continued moving around in the dark I saw an outline of it but couldn’t make it out clearly

“Mum is that you” I said terrified
No response

Then it hit me it had to be Jenny, she is the only one that lived down there, as the outline approaches me growing darker and darker

… Until I wake up shivering and covered in sweat not believing what I just saw and how hideous she , no it was. I look at the time and it is 1:48 am. I feel pain on my back and legs and check to see that I have deep scratches on both legs at that point I am completely freaking out. I look up from my scared legs and the door of my closet slams shut I look at the window but its not open.   I got out of bed avoiding the closet and entered the hallway. Every where was completely silent except for the sound of my heat racing. I look down the staircase to make sure it isn’t there, then I ran quickly into my moms room where I stopped frozen at the spot.

There it was in its hideous form hollow eyes, crooked body, dark wet hair and sharp nails. Hanging over her while she was sleeping on her bed, it raises its hand moving towards her face “Jenny stop it !” I shouted frantically. It turns to face me and let’s of a high pitched scream . My mom wakes up and looks at it, it jumps on the wall almost spider like with its head facing downwards and escapes through the window. My mom confused and scared out of her mind grabs my hand and pulls me down the stairs and out the door while I am crying and apologised cause it was all my fault cause Jenny had asked me to tell my mom to allow me to come down into the basement to play with her. Once we had made it out of the drive way and on to the road completely clear of the house we were convinced we were safe so we went over to one of my moms cousins place

My mom decided to research the history of the house. She found out that There were 7 little girls in the family that had lived there . And the name of one of the girls was Jenny .
My mother got scared, because during her research, she had discovered that the girl named Jenny had gone down into the basement one day and was never seen again. The family never found her and they moved shortly after that. 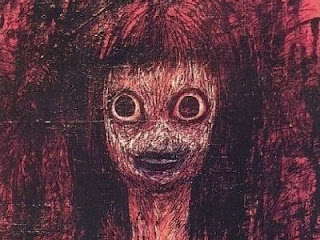 In this world there are things that you should never say out loud, and the Japanese poem “Tomino’s Hell” is one of them. According to the legend, if you read this poem out loud, disaster will strike. At best, you will feel very ill or injure yourself. At worst, you could die.

It is also said that if you read it in the dark at exactly midnight you would see something with red glowing eyes watching you as you read the poem sometimes stands directly behind it’s victims . Doing this is a sure death sentence according to testimonies of people who’s friends tried it out ( those words where present during the incident claimed that she had dragged it’s victim into a room where loud eerie noises eminated from after it was shout tight)  but where never found or wound up dead in the oddest and most brutal way you could imagine . BEWARE I DO NOT ADVICE ANYONE TO READ THIS EVEN I DIDN’T 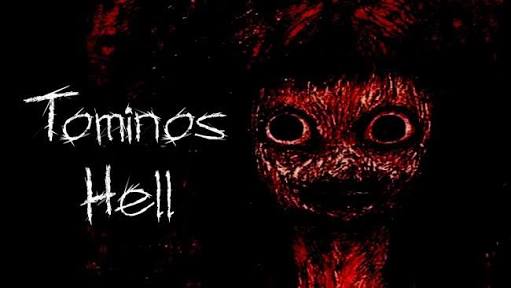 The older sister vomits blood, the younger sister spits fire.
Cute Tomino spits treasured jewels.
Tomino died alone and fell into hell.
Hell, darkness, with no flowers.
Is it Tomino’s older sister that whips?
The number of red welts is worrisome.
Whipping and beating and pounding,
The path to eternal hell is only one way.
Beg for guidance into the darkness of hell,
From the golden sheep, from the nightingale.
How much is left in the leather bag,
Prepare for the endless journey into hell.
Spring comes and into the woods and valleys,
Seven turns in the dark valley of hell.
In the cage is a nightingale, in the cart a sheep,
In the eyes of cute Tomino are tears.
Cry, nightingale, for the woods and the rain
Voicing your love for your sister.
The echo of your cry howls through hell,
and a blood-red flower blooms.
Through the seven mountains and valleys of hell,
Cute Tomino travels alone.
To welcome you to hell,
The glimmering spikes of the needled mountain
Stick fresh punctures in the flesh,
As a sign to cute Tomino.

I have no idea whether or not it is safe to read the English translation out loud. If I were you, I would err on the side of caution.

In this video you can hear Tomino being read in Japanese. You will notice that the person who made the video used text to speech software. They didn’t dare read it out loud themselves.

Stories where modified from scaryforkids.com

A jack of all trades, but master of few. He likes writing both fact and fiction, eating anything that looks tasty, pretending his life is an anime,loves watching movies, anime and reading manga,occasional a smart ass but cool and calm at the same time, pondering the bigger questions in life, and playing games of all sorts.
Articles: 16
Subscribe
4 Comments
Newest
Oldest
Inline Feedbacks
View all comments