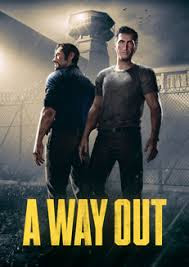 Click here to get game
Platform(s)
Release Date
Genre(s)
Mode (s)
If you love prison break, and get out of prison movies you will love this game, I have been playing this game with my little brother for some days now and I love it. It’s a game that really allows us to bond and spend time in the same room for hours on end.
A Way Out is an action-adventure game developed by Hazelight Studios, published by Electronic Arts. The next game written and directed by Josef Fares, one of the people behind Brothers: A Tale of Two Sons. Like is previous game Brothers, where you control the two characters, both controlled simultaneously and independently via analogue, to solve puzzles and platforming and had a great story.
A Way Out is played from a third-person perspective, made to be played in a split-screen cooperative Multiplayer. Which means you need a second person to play with you either local or online play. It offers no single-player option.
It’s a very fun and unique way to play, telling the story of two characters and allowing you to experience them at the same time. You play as Leo and Vincent, two prisoners trying get to break out of prison and help them live their lives on the run. To advance in the game the two players most work together, for instance one player could distract the guard while the other acquires a tool that will help them.
And progress is not synchronised, this means that one player could be watching a cutscene while the other player is moving around doing something else or while the player talks to a non-playable character. There are different ways to approach a situation in the game, with players taking different roles with their characters.
The game on release sold over a million copies in two weeks. It a great game to play especially with another game lover.