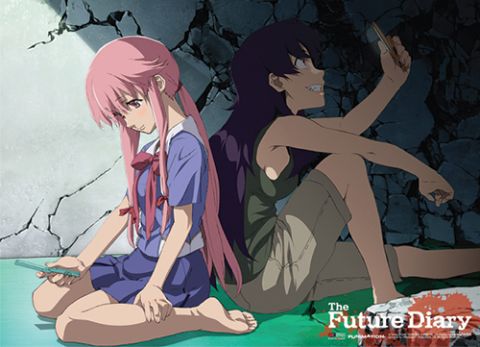 Mirai Nikki was one of the anime,I have heard a lot about and really have wanted to watch for a while now. And man, I LOVED IT. I’d heard many reviews about this show before, and on knowing the plot, I was excited to watch it. When I first listened to the anime opening, I was pumped. The first three or so episodes were good, but it can be really dark, but you will not regret watching it.

A boy is granted the ability to tell the future through his phone, but it turns out he’s been chosen to take part in a battle royale involving 12 diary owners who have abilities similar to him.Sounds interesting, right ?. From focusing on the survival game, this anime decides to focus on the relationship between two characters, Yukiteru, the first and Yuno Gasai, the second. So it’s not just fights between the characters, and all the characters pasts and motives for why they act the way they do and what their aims are, are explained, but love is a major theme throughout the animals. The fights usually take a back seat, and get over in a few measly seconds, but it does really get intense at the very end of the anime. Its interesting, the story was handled well, giving something to everyone. And it’s sometimes painfully realistic but this only makes for a better story. You well even find yourself rooting for the villains.

The art was average, not bad, but it wasn’t the best I think it could’ve been either, especially for a show from 2011. Some of the characters had such terrible designs that it was hard to take them seriously.

All the criticism aside, Mirai Nikki truly shines when it comes to music and sound, which is probably the best aspect of the show. The soundtracks fit the mood perfectly, Here With You and the battle theme being some of my favorites. Besides this, both the OPs and the EDs were amazing!! I never skipped them.

Most of the characters are good, unique and fascinating.First of all, we have our protagonist, Amano Yukiteru, a weak, subservient character, he’s pathetic, to say the least. He makes it far in the survival game at first because he’s the main character, using Yuno and pure luck. But he does shape up as the anime continues and does prove himself reliable, especially at the end.Yuno Gasai, even the newest anime fans will recognize her as the poster girl of the “Yandere” genre, and not to mention, I’ve heard there’s a “Yandere Girl Simulator” game so it’s safe to say her popularity will further increase. I liked her in the beginning, but later, she became a crazy psycho, but I liked her even more in the end. Even though she’s crazy there is a reason why she is the way she is. And you understand her and feel sad for her most of the time, especially after seeing her back story.Two characters I genuinely liked other than Yuno throughout the entire series were Uryuu Minene, the ninth diary owner and Akise Aru. I liked the amateur cop Nishijima as well.The other diary owners were really of the wall crazy, weird or will make you wonder what was Deus Ex Machina thinking when he included them in the survival game.

Again, this anime was enjoyable, it’s probably going to make you feel bad, about the sweet, happy, laugh, maybe cry but you will feel a lot of emotions watching this anime. You will not regret taking time to watch this anime.

This anime was enjoyable, and I’ll say it, it made me wish for more, it is wonderful and definitely worth watching. For people who want to watch this anime and liked it, I’d will recommend if you are looking for something as exciting; Attack on Titan, Death Note or Code Geass.For people who want to watch an anime of a similar genre, I’d recommend Fate/Zero, which I thought was excellent.Besides this, the writers of Death Note are currently working on a manga called “Platinum end” with a similar storyline to this show. The Battle Royale manga and novel is very similar to this(almost suspiciously similar) , and that, again was amazing to read.