Beatless: What Makes Us Human?

I just joined a wonderful group of writers, known as OWLS. If you aren’t aware, OWLS is a group of anime bloggers whose mission is to spread respect, self-awareness, and other positive themes using anime and pop culture as a medium. Their homepage motto confirms their awesomeness with this quote: We promote acceptance of all individuals regardless of race, gender, sexual orientation, religion, and disability. We emphasize the importance of respect, kindness, and tolerance to every human being!

EXACTLY my type of group! It’s so wonderful knowing that there is a community for people like me.

The theme for May is “Movement.” Here was the prompt:

We join movements, organizations, and systems that align with our own personal values and beliefs. Sometimes we join these groups because they believe in doing good and making positive changes in society. However, these movements can turn sour when a dictator arises or behind the good intentions, there’s a hidden agenda of oppression. It is in these groups that individuals start to shape their identities by questioning their values and beliefs or conforming to the system. This month, we will be examining “real and/or fictitious” movements, organizations, or systems in anime and other pop culture mediums, and the positive and negative effects they have on individuals and society. 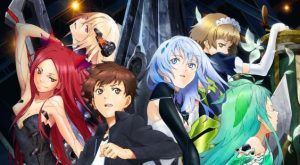 For this post, I decided to write about a new anime that I was introduced to.  Beatless. In particular, the Human Rights Movement that has been around for as long as anyone can remember.

*(Warning: This post will contain major spoilers! Also, I don’t own Beatless. Obviously)*

How Does Beatless Count as a Movement?

The original BEATLESS novels are published in Japan by Kadokawa Shoten, and English language versions are also available from Tokyo Otako Mode, who describes the story of BEATLESS as follows:

One-hundred years into the future. A world in which society is mostly operated by humanoid robots called hIE. With the introduction of an ultra-advanced AI that surpasses human intelligence, beings that mankind is yet to fully comprehend made from materials far too advanced for human technology begin coming into being. Lacia, an hIE equipped with a black coffin-shaped device, is one of these. In boy-meets-girl fashion, 17-year-old Arato Endo has a fateful encounter with the artificial Lacia. For what purpose were these artificial beings created? Amid questions regarding the coexistence of these artificial beings and humans, a 17-year-old boy makes a decision…

Now, you might be thinking that Beatless is just another run of the mill anime, even a harem. When I first started watching it, I wasn’t too crazy about it. But after a few episodes, I was hooked. They’ve only released 15 episodes and there will be 24 in total.  But the main character, Arato Endou “picks up” an hIE(or what we call AI in our world) and falls in love with her. His friends Kaidai Ryou and Kengo Suguri despises them and just wants them to not even be on the planet. 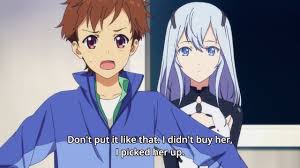 In today’s world, we’re getting scarily close to AI becoming more of the norm. When the humanoid robot Sophia was granted citizenship in Saudi Arabia—the first robot to receive citizenship anywhere in the world—many people were outraged. Some were upset because she now had more rights than human women living in the same country. Others just thought it was a ridiculous PR stunt.

Should robots be given human rights? What classifies someone, or something, as human? 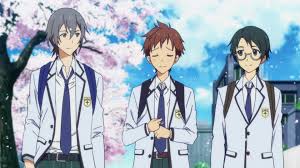 Kaidai Ryou and Kengo Suguri with Arato Endou in the middle

Emotions are not a luxury, but an essential component of rational thinking and normal social behavior. It’s these characteristics, and not merely the ability to crunch numbers, that matters when deciding who or what is deserving of moral consideration. Even some humans don’t have emotions.

If you think of people today, you have some who are incapable of feeling emotion such as psychopaths or narcissists. Or rather, I should say, they feel the emotion of others pain and suffering. Not what we, as a society, would normally feel.

We already attribute moral accountability to robots and project awareness onto them when they look super-realistic. “The three most important thresholds in ethics are the capacity to experience pain, self-awareness, and the capacity to be a responsible moral actor,” sociologist and futurist James Hughes, the Executive Director of the Institute for Ethics and Emerging Technologies reported in an earlier article.

“The more intelligent and life-like our machines appear to be, the more we want to believe they’re just like us—even if they’re not. Not yet.”

In Beatless, even though we don’t have all the episodes out, we’re given a glimpse into what our own world could possibly become. With the AI Sophia, we can still TELL she’s an AI. If, as James Hughes stated earlier, she looked even more human, would we become more inclined to give her what we consider human rights? 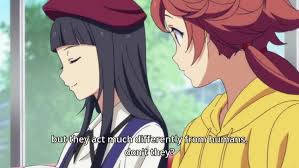 “Robots are machines, more similar to a car or toaster than to a human (or to any other biological beings). Humans and other living, sentient beings deserve rights, robots don’t, unless we can make them truly indistinguishable from us. Not only how they look, but also how they grow up in the world as social beings immersed in a culture, perceive the world, feel, react, remember, learn and think. There is no indication in science that we will achieve such a state anytime soon—it may never happen due to the inherently different nature of what robots are (machines) and what we are (sentient, living, biological creatures).

We might give robots “rights” in the same sense as constructs such as companies have legal “rights”, but robots should not have the same rights as humans. They are machines, we program them.” -Kerstin D, Professor of artificial intelligence school of computer science at the University of Hertfordshire

There are 5 main hIE’s that escape in Beatless. Each one is given a “job” but they all have a similar desire to survive. 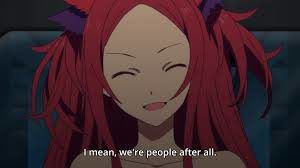 Kouka, an hIE, gives this statement in an earlier episode. Which caused me to think even more. While I know this is just an anime, it still caused me to think of our world and reality today. In the last episode(episode 15) she asks the question: “What’s the future to an object anyway?”

As the story progresses, it becomes interesting when Lacia obeys a command from Arato when he just says her name. Previously, we were led to believe that she couldn’t accept commands that were too ambiguous. Since the anime isn’t finished, we can only speculate. But it seems as if Lacia is “over-riding” her original hardcopy and gaining what could be considered feelings…human emotion, for Arato.

One thing that shows this is she destroys her programmer, which means she can no longer accept new owners. If Arato dies, she can no longer survive either. It contradicts the knowledge of the hIE’s only being out for survival.

Beatless makes you think, even as an anime…do they have emotions? Or is this just another analog hack?

Endou Arato is even said to be the perfect tool for analog hacking. When Lacia changes her calling him “owner” to Mr. Arato because he responds better, she even admits that she has been analog hacking him.

Analog hacking is basically, causing someone to do what you want them to do, through manipulation and emotion. The hIE is intelligent enough to read and think what you would do, changes their behavior to “hack” you into doing what it wants. Basically, as true to a politician as you can get. To manipulate peoples feelings to get what you want. Sounds a lot like our government and society now, doesn’t it?

But, What Are We Hiding? 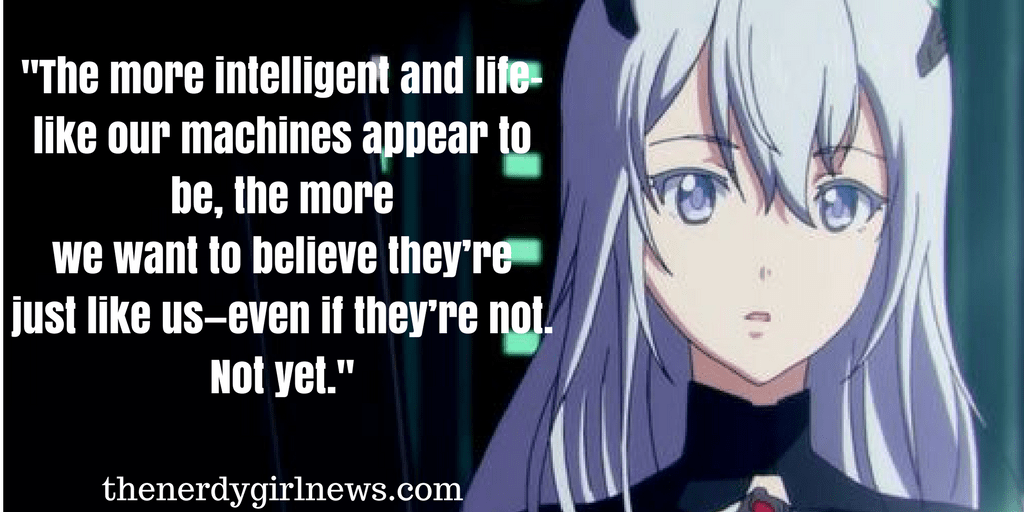 “I don’t believe that there is any plausible case for the “yes” answer, certainly not at the current time in history. The Saudi Arabian grant of citizenship to a robot is simply a joke, and not a good one.

Even with the impressive achievements of deep learning systems, the current capabilities of robots and AI systems fall so far below the capabilities of humans that it is much more appropriate to treat them as manufactured tools.

There is an important difference between humans and robots (and other AIs). A human being is a unique and irreplaceable individual with a finite lifespan. Robots (and other AIs) are computational systems and can be backed up, stored, retrieved, or duplicated, even into new hardware. A robot is neither unique nor irreplaceable. Even if robots reach a level of cognitive capability (including self-awareness and consciousness) equal to humans, or even if technology advances to the point that humans can be backed up, restored, or duplicated (as in certain Star Trek transporter plots), it is not at all clear what this means for the “rights” of such “persons”.

We already face, but mostly avoid, questions like these about the rights and responsibilities of corporations (which are a form of AI). A well-known problem with corporate “personhood” is that it is used to deflect responsibility for misdeeds from individual humans to the corporation.”- Benjamin Kuipers, Professor of computer science and engineering at the University of Michigan 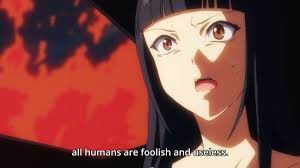 While in this anime, I see the hIE’s as humans, I don’t typically see our world getting to this level. They still have emotions, they’re just different from us, that’s all. There are good and bad people, just like there are good and bad hIE’s. I wouldn’t treat an AI any differently, but I don’t think I would fall in love with it either. Even as robots get smarter, and even when their smartness exceeds humans smartness, it doesn’t change the fact that robots are of a different form, so to speak. I’m not downgrading what robots are or will be, I’m just being realistic.  Should robots be given rights? Yes.  Humanity has obligations towards our ecosystem and social systems. AI will be a part of that.

And maybe we should focus on treating humans more like humans before we start to worry and criticize how we’re going to treat something that doesn’t yet fully exist.

What do you think? I would love to hear your thoughts on this!

If you liked this post and want to spread awareness about mental illness or other social issues, please follow the other work of OWLS. Here is the official OWLS blog. 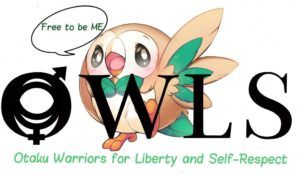 The next post on the blog tour is from Takuto! Be sure to check it out once it is up. If you missed the previous one, check out Marina’s here!

What Shugo Chara Taught Us About Life 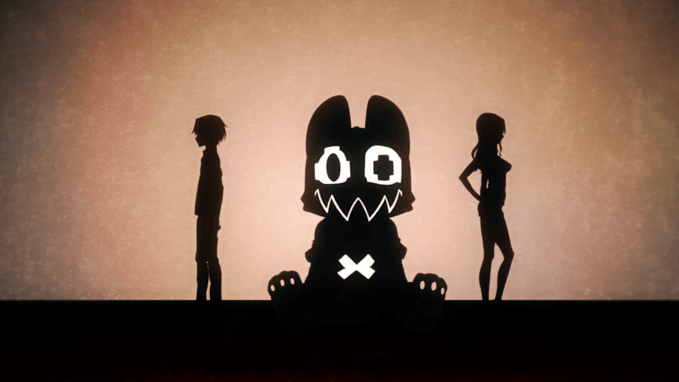