Related: Devil’s Line: How Could They Work?

I finally sat down to finish watching this anime after missing the last two weeks. But I’ve already read the manga, the anime itself wasn’t that bad. Still, the manga clears up a lot of confusion and I still highly recommend it for anyone wanting to know what exactly is going on.

The biggest problem with this anime versus manga is that the original story is too big to be covered entirely in a short series anime.  As a result, the anime ends up introducing way too many characters way too fast. We’re supposed to even care about them but a lot of them just come off as flat. We can’t cover them all, so for the vast majority of them, there is no sense of closure. I mean, we straight up have no idea what happens to some of them. And I’ll admit that I couldn’t even remember most of their names half the time. 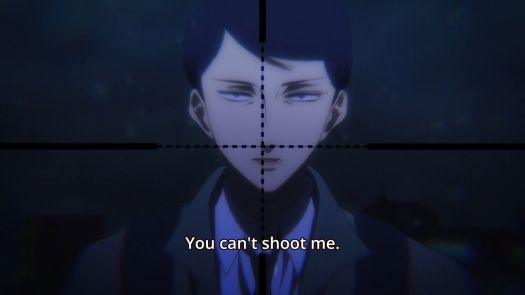 For instance, Nanako (a.k.a. Zero Seven) could’ve taken Kikuhara out herself. Unfortunately, he has a strange hold over her, so she just can’t pull the trigger.  It feels weird when a story thread suddenly cuts off with no sense of finality. That’s exactly what happens here. I wish the anime had explained more of her and not to mention, WHY Kikuhara is such a butthead.  The manga goes into more detail as to why, but I wish the anime would have as well.

Hans Lee gets Tsukasa to safety after she gives Anzai her blood, but he pretty much has to go into hiding after he does. Unfortunately, the adaptation kinda glosses over this. Which I’m not a fan of since Lee has been and will always be one of my favorite characters.  He risked his life to do so and barely is given a second glimpse.

As Anzai remains unconscious, he starts to see a memory from his youth. Kikuhara had taken him to see his father. That’s it, basically. I feel like there is so much more to it than what they showed, but that was it. A huge buildup and then…nothing. How very anti-climatic.

In fact, it seems as though they have assassinated Kikuhara. This same car explosion happens in the manga, but the guy survives it. In the anime, however, it looks pretty fatal. But hey, if there isn’t going to be a sequel, then it doesn’t really matter if Kikuhara survives the explosion or not. I’d be okay with there being a sequel and second season to this, but they’ll have to add more and explain a few things. 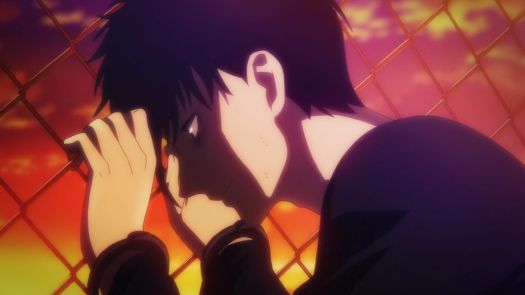 After Anzai wakes up, he despairs over the fact that he had lost control of himself and bitten Tsukasa. He loses faith in the idea of a human-devil romance. Kano(old guy…I think) tells him what really happened with his Father. Essentially, Anzai’s father was okay up until some bastards killed his human girlfriend. As a result, he took revenge on them, but the deed made him lose himself completely. He then went on a rampage and killed more people. So he’s a bad guy, but there are reasons for it.  Also, his mother fell in love with his father AFTER he was already locked up and considered a murderer. Which I thought could use a heck of a lot more explaining.

So the credits begin to roll, and afterwards, there’s a time skip. Again, the adaptation skips over a ton of events to get to this point. Plus, I think it’s lame that they’re still blushing at each other at this stage of their relationship. But no matter, the story here is essentially over. The only context you need is that Tsukasa has now found a purpose in life: she’s going to devote her life to researching and understanding devils. And her and Anzai are together.

They could have explained why Anzai was even there though. Did they lift the ban on him? Did he just suddenly sneak out? The anime makes it appear like it’s a long time, but according to the manga, it’s only 10 weeks. Which shouldn’t really surprise me since the anime has barely been following the manga anyway.  But anywho…

Have you already watched it? I do seriously recommend it as I think it’s good. But still, read the manga. It gets better. And explains more. Devils Line Anime isn’t better than the manga, but you’ll like it!

Let me what you thought in the comments below!

Spends her time watching anime and reading anything she can get her hands on. Also passionate about Disney, Harry Potter and helping those with depression and anxiety.
Articles: 127
Subscribe
3 Comments
Newest
Oldest
Inline Feedbacks
View all comments