This review does contain spoilers.

I actually stumbled across Itazura Na Kiss or Ita Kiss, because I wanted something “happier”  to watch as I’d just finished a really intense anime. I’m actually quite partial to romance anime and have watched some of the big ones such as Ef: A Tale of Memories, Clannad, Air, etc.

But this anime ya’ll…wow. Just wow. There is one moment that I wanted to talk about and the main reason for this review, but this isn’t a great romance anime. I needed to say that first. This anime is not happy or cute. It’s sadistic.

The Recommendations list compares Itazura Na Kiss to Clannad After Story which is by far one of my favorite animes. This is mostly due to the fact that the story itself continues after high-school and into their future life. That is where the similarities stop. This is NOTHING like Clannad. 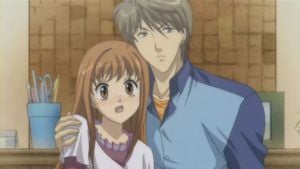 This moment was one I actually thought made up for the rest of the anime. The whole reason I even wrote this review in the first place. 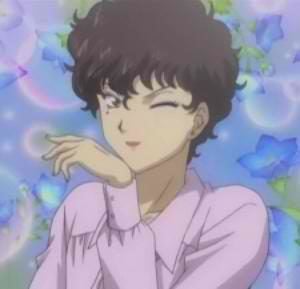 Kotoko is selected as the representative for her class and has to recite the Nightingale Pledge because nobody except Moto volunteered. Since the head nurse knows that Moto is a male and the tradition was to have female nurses to recite the Pledge, he wasn’t selected. Afterward, Kotoko practices memorizing the Pledge but has trouble when Moto walks by reciting the entire Pledge perfectly. At that moment, Kotoko realizes that Moto really did want to be a female nurse so she schemes a plan with him.

Towards the end of the ceremony, Moto shows up wearing a female nurse uniform. The head nurse tells him to go get changed but Kotoko and the rest of the class objected so the nurse ended up capping Moto.

I thought it was such a beautiful moment that the head nurse actually accepted it and let him wear the cap. The amount of respect and acceptance from the rest of his class was astounding. In today’s world, there has slowly been an increase in accepting people who are transgender but there does still seem to be a stigma attached to it.

When her newly-built home is razed to the ground by an earthquake, low-achieving, clumsy, and troublesome third-year high school student Kotoko Aihara is forced to share a roof with the school’s smartest student, Naoki Irie. Kotoko is not actually a complete stranger to Irie-kun; unfortunately, a single love letter that she tried to give him in the past has already sealed her fate. Throw in some quirky friends and a meddlesome mother, and Kotoko might not even have a snowball’s chance in hell of winning the older Irie boy’s heart. Yet Kotoko remains optimistic that, because she now lives in his house, her unattainable crush on the genius since the beginning of high school has never been more within reach. 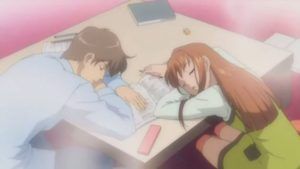 At first, I did notice that Irie was cold but I thought “Hey, maybe there is a reason for this and they can build on it later” so I continued watching. But nope. Not at all because it only gets worse and as the relationship between Kotoko and Irie began to grow, I began to get more and more disgusted with the story.

I despise Irie – I cannot find one redeeming thing about his nature. He is a genius but only because he has a photographic memory and not because he works hard. He doesn’t love Kotoko – even when their relationship inevitably blossomed, he is still cruel to her. 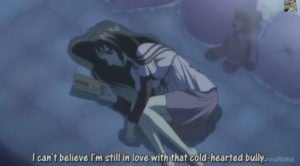 Not the Right Relationship in Itazura Na Kiss

I mean really, is that the sort of relationship that people want? A man who is cruel to the woman they love? Humiliates her in public for his own pleasure. Kisses her when she wants to get over him and then pretty much tells her “Try to get over me now.” It is cruel but Itazura Na Kiss doesn’t seem to focus on how cruel it is and only that Kotoko loves him because he’s so “cool”.

In addition to being a major tool, Irie is one of the most emotionally vacant anime characters I’ve seen. Stoic and cold-hearted characters can be great but they have to have some substance. Irie was just too robotic to really connect with. The whole detached genius thing got old pretty quickly. His character development was severely stunted too. He is cold and aloof to everyone and while they at times touch on why this is, they sadly never develop this part of his personality. He does make a lot of growth in his character through the series, though annoyingly he often reverts back to his old ways in the following episode. 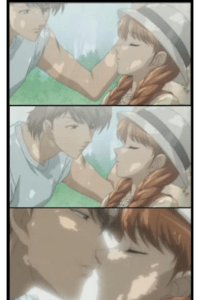 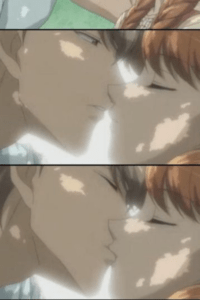 Our Female Heroine…if You Can Call Her That

I actually quite like Kotoko – she is funny and sweet and seems genuinely caring. However, I cannot forgive her masochistic love for Irie.  Let’s be fair to her, she does try to move on but Irie then miraculously decides that he loves her.

However, as loveable and likable as Kotoko is, you can’t help but wonder what it is she sees in Naoki who is so cold and mean to her.  You have to wonder why she bothered with him in the first place.  You don’t feel like she has any real dreams of her own beyond her relationship with Naoki.

Kotoko lacks just about every trait that a woman should have. She has no pride, no self-respect, no brains, and no ambition. Well, that’s not true, she has ambition. Her sole ambition in life is to get the attention of her high school crush. An attraction based on infatuation rather than anything substantive.  She’s willing to endure being humiliated, hit, bullied, and insulted by Irie because well, it’s Irie-kun and she “LOVES” him.

She sends out the wonderful message to young girls that if you just try hard enough with a guy who treats you like crap, you too can spend the best years of your life in an emotionally abusive relationship.  I felt pity for Kotoko throughout the series more than hope or encouragement. 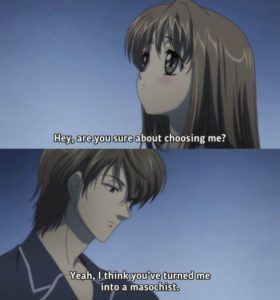 Does it Have any Plot?

Ita Kiss centers on Kotoko, a character whose whole being revolves around the guy she likes. Unfortunately, the guy she happens to like is mean-spirited when he’s not being completely indifferent towards her, rude, arrogant, and a complete jerk.

It never becomes quite clear how it is anyone could fall in love with him beyond his looks and top exam scores, but we’re also not supposed to believe that our female protagonist is so shallow as to only want him for his outward appearance and therefore it doesn’t ever seem to make sense how she could love him so much when he treats her so poorly. As we become aware of Kotoko’s strong will and determination when it comes to all things to do with getting her guy, we are also left puzzled by the fact that she doesn’t use it to make more of herself independently of him.

I forced myself to sit through this anime so that I could form a justified opinion on it. I was also perhaps hoping that Kotoko would come to her senses, realize she could do better and dump the guy. Kin-chan was actually my favorite in this anime. I didn’t expect to like him but he loved Kotoko for who she was – no matter if she was stupid or not, he would love her. He wanted to be with her and “make her smile”. I would have been happy if Kotoko had run off into the sunset with Kin-chan and restoring my faith in women. I’m also a fan of Keita.  Keita happens to be the only character that tells Kotoko to break it off with Naoki because he doesn’t care about her. Finally someone with some common sense!

Related: Homosexuality and Relationships Through Yuri on ICE!!!

Have you already watched Itazura Na Kiss? What did you think of it? Let me know in the comments below! 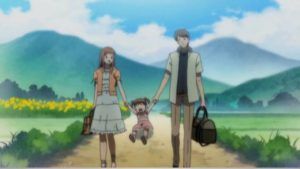 Spends her time watching anime and reading anything she can get her hands on. Also passionate about Disney, Harry Potter and helping those with depression and anxiety.
Articles: 136
Subscribe
4 Comments
Newest
Oldest
Inline Feedbacks
View all comments

Horror Anime vs Horror Movies: Which Is Scarier?

What? You still didn’t watch One Piece?