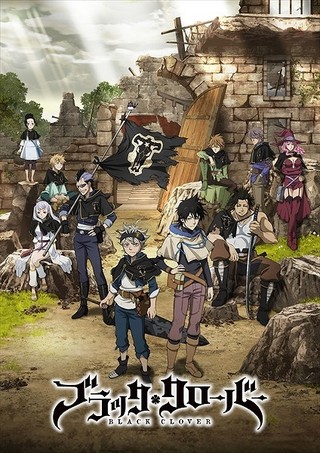 So we are looking at black clover today and for you that don’t know or haven’t watched it yet.
Black clover is about ;
Asta and Yuno are orphans, that are abandoned at the same church on the same day. Raised together , they came to know of the “Wizard King”—a title given to the strongest mage in the kingdom—and promised that they would compete against each other for the position of the next Wizard King. However, as they grew up, the difference between them became evident. While Yuno is able to wield magic with amazing power and control, Asta cannot use magic at all and desperately tries to awaken his powers by training physically.
It reminded me a lot of great classic senen like Naruto, HxH, etc. You have the typical hyperactive protagonist but for some reason I find myself cringying so far whenever he talks and the best friend/rival that’s a genius and talented in all things.
When they become the age of 15, Yuno is bestowed a spectacular Grimoire with a four-leaf clover, while Asta receives nothing. However, soon after, Yuno is attacked by a person named Lebuty, whose main purpose is to obtain Yuno’s Grimoire. Asta tries to fight Lebuty, but he is outmatched. Though without hope and on the brink of defeat, he finds the strength to continue when he hears Yuno’s voice. Unleashing his inner emotions in a rage, Asta receives a five-leaf clover Grimoire, a “Black Clover” giving him enough power to defeat Lebuty. A few days later, the two friends head out into the world, both seeking the same goal—to become the Wizard King!
This anime as been horrible. I don’t even need to break down in different sections to explain how bad this anime is. The story is pretty much your run down the mill trying to be achieve high status so people can praise him. It’s similar on how Naruto wants to be Hokage while Asta trying to be the wizard king and this was something about it I was looking forward too, especially when I thought Naruto was ending. The story is usually bland, it’s literally always expected what will happen and you never feel attached to the moments or feel the intensity of the situation even if it’s supposed to be a serious one.
Unlike Naruto, Asta is more annoying than likeable always running around and screaming like a maniac at least 100 times in every episode. Also get’s a sword which he uses to cut magic and pretty much win everything, but my problem is that is all it does there been no show of anything special about him. It seems poorly executed even for a Shounen anime. It tries so hard to mask and act like it’s Naruto at least to me, but it seems to try so hard so things that could have made it unique and amazing seem not to be exploited.
Flashbacks in like almost every episode which tries to give character development but literally actually do the opposite rending the character looks bland and useless. The voice acting for Asta is dreadful. It’s trying so hard to be Naruto and TRYING so hard to appeal to the younger audience fans. There’s nothing special or even unique in the characters. They are trying to be but seem more generic or creepy/weird. I did not enjoy one second of this anime, I honestly thought this series will shine some light through the Shounen genre just like Academia did but this is probably one of the worst Shounen series there is so far, but I really think it could be improved, it’s a great material there are still plenty of ways to save it.
And their development in power are always in an instant, unrealistic and I don’t find it believable.This anime is bad so far story wise but the sound -opening and closing songs have been great. I have been watching so far because I think there is still hope for the anime getting better and after watching episode 28 – “The one I’ve Set My Heart On” opening intro, it made me believe there is still hope for black clover.
Some say Black Clover is Yuuki Tabata way of retaliation/statement against the higher-ups at WSJ for axing is manga Hungry Joker. Like is said before the voice acting is just terrible, Asta’s voice actor literally as one voice setting and that’s loud and annoying. It’s the first time I find myself cringying from a character opening their mouth to speak. The animate could have been better and I don’t feel Tabata’s art style, was brought out properly from panel to the big screen. Maybe if it was handled by more known animation studios like Bones or Madhouse to name a few it could have been better.
I did say Black Clover is a cliche but if it’s improved on and done right, it could end up become a really great anime like My Hero Academia as been going. After all there is a reason why cliches exist, and that reason is because they work, are enjoyable and we love them if done right.

But am still putting a light out for this anime that it can and will get better.

In The Deep of Night