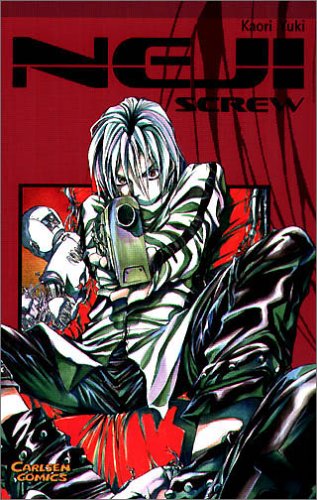 A story set in a futuristic world that mixes elements of sci-fi (cryogenics, automatons, etc.) with a light touch of supernatural powers. Story, 7: Despite a short length of only three chapters, the world is fleshed out quite well. Readers get a sense of the state of the Earth, the implications of human experimentation, and what (if any) difference exists between artificial intelligence and human consciousness.Art, 7: The action scenes were nice and the character designs felt fresh and distinct from each other.Characters, 6: While I thought the main characters were interesting and certainly had a unique relationship, I was a bit underwhelmed by the GERA organization as a whole ( and Luzer in particular). The female characters mostly seemed like plot devices to push the protagonists along, which also irked me.Enjoyment, 7: I finished this much quicker than I had anticipated. The world-building and potential for growth really attracted me, so it’s a shame that the series is complete (though I think it wraps up nicely as it is).Overall, 7: I would recommend this to fans of sci-fi or anyone that might want to try a more action-oriented shoujo series. Fans of Yuki Kaori’s other works would probably enjoy this as well. A quick but entertaining read.