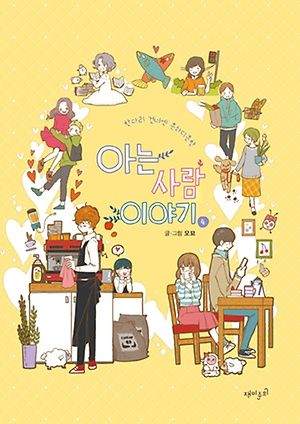 The storyline is fairly complex with it’s own separate stories being told through different perspectives. I thought the concept of the storyline was actually incredibly nice. I enjoyed how distinct each character’s story was and how their relationships changed over time. I definitely shed some tears feeling close to what the characters went through.The main three characters go through several struggles, the conflicts felt real and the problems weren’t cliche. It was as if each character was real and had their own thinking process. You can see it in the way they respond and take in certain events. I did, however, get lost at times since the story constantly switches positions from one character to another. In a way, I felt like the stories were too separate for me to follow along. It was as if the only thing connecting all their stories together was the fact that the main characters were friends however they don’t interact with each other that much after the exposition. The art was pretty cute I didn’t mind the simplistic style at all. Of course, it would be hard to express much emotion in the visuals but the dialogue makes up for it. The characters are very distinct including what form their relationship takes. They are the classical types of characters, the “tsundere”, happy dense one, and the “kuudere”. A pretty good mix of variety. Since the storyline covers an immense amount of time there is some degree of character development but I was hoping for a bit more noticeable change.Honestly, it did take me a while to finish this mainly because at one point I put reading this series on pause because I was getting bored of it. There isn’t any noticeable moving on the storyline in filler chapters and I might’ve read it continuously if there was more contact between the main characters with their stories. In the end, The Stories of Those Around Me was a good way to pass time and I found myself relating to their struggles and happiness at times and found reading it a pleasant experience. I’m not actually that good on critique however and then again this was just how I comprehended the story :^)