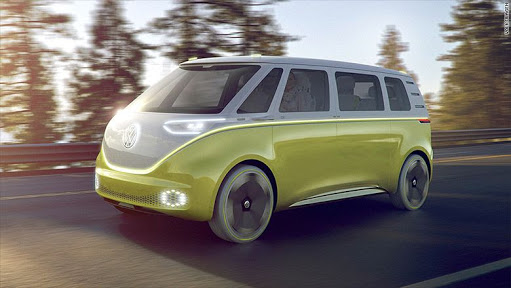 Volkswagen new futuristic electrical camper van the I.D Buzz camper van which is a futuristic reimagining  of the iconic T2 Camper which was very popular when it was on sale.
Now the van has been reborn in a bold way with heaps of technology, autonomous driving features and a progressive design. The new vehicle will be based on the new MEB car architecture which integrates the battery into the floor to increase room inside the cabin.

While the Buzz will not go on sale until 2020 or 2022, and should cost between $30,000 and $40,000 aimed at the Chevrolet Bolt and Tesla Model 3,  in a partnership with NVIDIA, the company revealed its ambition to bring AI and deep learning to its future models. “In just a few years, every new vehicle should have AI assistants for voice, gesture and facial recognition as well as augmented reality,” Huang said. One feature that the company’s will be working on is the Intelligent Co-Pilot capabilities. These will include convenience and assistance systems based on processing sensor data from both inside and outside of the car. One feature of these systems is how they will be developed and improved throughout their lifetime via software updates.  The system is also said to be able to learn on the road, assessing different situations, analyse the behaviour of the driver and other road users and will also be able to unlock and opening of the doors using facial recognition is also being worked on.Other discussed feature included driver alerts for bicycles, gesture recognition for user controls, natural language understanding for flawless voice control, and gaze tracking for driver distraction alerts are all possible.

All You Need Is Kill – Manga Review