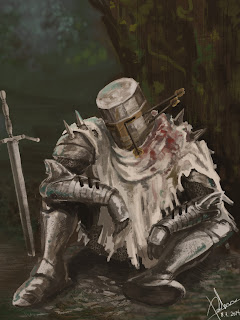 “You insolent fool!” a female voice rang out through the underground corridors of the Smoke Dagger hideout. The female voice in question belonged to a Drow that stood in front of the bandit that was on the surface before. Her skin was grey and looked just as smooth. Her hair was shaved on the right side while it grew on the other side. It was a shiny grey that complemented well with her very noticeable purple eyes. She was dressed in black robes that showed off her stomach and a bit of cleavage that earned her a bunch of attention that was than just business. On the bottom was short pants that clung to her thighs tightly and high boots that left a small gap between them and the pants. In two holsters on her hip, she kept two double edge short swords. Her expression was much less charming than her looks was at the moment as she tore apart the human before her.

“Okay, I get it. Get off my back.” the man said, pulling the mask off his face. “It’s not like I wanted them to catch me.”
“All you were told to do was rob the shop of its goods and come back.” the drow said, sneering at her former member of the gang. “I swear, you couldn’t have f**k this up more.”
The man growled as his face turned to that of pure hatred and placed a hand on his weapon before another man stepped through with two guards by his side. He was tall and very muscular with an eye of annoyance present as soon as he walked in. He had brown hair that was messy and short. He had a chinstrap beard that was brown as well. He was bare-chested with a grey cooled cape draped around his neck. He also wore thick red pants and black heavy boots. His hazel coloured eyes went from the drow to the human before smiling widely.
“Xune, are you patronizing poor Bryan again?” the man asked in a very husky voice. “You two must learn to get along.”
“If he keeps screwing up this missions, the only place we’re going to get along in is jail.” Xune said, pointing a sharp finger at the man behind her. “I’m not going down for anymore screw ups.”
“Out of my way, I got other things to do.” Bryan bumped pass Xune and walked out the room and down the hall. Xune stayed silent with silent anger filling up her body as the man that walked in put his large hand around her shoulder.
“Well, what I came to say was going to upset him more anyways.” he said, looking down at the drow who glared up at him. “I have a proposition for you.”

Walking through the torch lit walls of the sewers, the team led by Althia took the southwest route of the underground tunnels while the other team went the southeast of the tunnels. The trip was mostly filled with friendly talk from Althia. All four was completely oblivious to Wilton and his members and was hoping they were alright and not encounter anyone just yet.
“This is super exciting.” Lukas said, walking next to Althia who listened in with a smile. “Time for this group of bandits and thugs to pay for what they have done.”
“One step at a time Lukas.” Mikal said, patting his shoulder pad. “These guys will get what’s coming to them.”
“We really appreciate the Edonian soldiers coming over to help us with this crisis.” Althia said sincerely, turning towards the three walking with her. “We are forever in your debt.”
The three soldiers smiled and continued behind their leader for a while until a wider room came up and an eerie feeling came down on all of them. All four of them slowly drew out their weapons and looked around with only the sound of dripping  water and tiny rat feet scattering on the floor.
“They’re here,” Antania softly said behind her shield, looking directly into a shadowed part that was under a stairwell.

From it flew out a small dagger that ricocheted off of her shield and caught the other three’s attention. Right afterwards, a large group of bandits came out with all sorts of weapons and malicious grins towards the group. All four fighter lined shoulder to shoulder as all of the members gather in front of them. There were almost a dozen of them with one leader coming out and looking smug while twisting the edge of a sword against his index finger. His hair was a deep red and was long to the length of his shoulder. He didn’t wear a face mask like his other members. He wore all black clothes with few pieces of metal outlets, showing signs that he was some sort of leader.
“Well, well,well.” he started, holding his sword to the side. “Looks like a couple of surface dwellers have come down into the lost labyrinth.” A few of his men riled up and started taunting the team of four.
Althia stepped forward, which quieted everyone for a good minute so she could speak. The leader smiled and gripped his sword more tightly before he stepped forward as well, pushing a few strands of hair from his black coloured eyes.
“Welcome Althia,” he greeted, with a few of his men snickering and chuckling in the background. “I see you’re back with more of your worthless people to ki- Agghh!”
Out of surprise, the leader of the bandits in front of the team of four received a sharp and quick headbutt for the woman who held a never ending fire in her eyes. He fell to the ground with a hard thud and a metallic clang from his weapon. He sat up with blood running down his nose and stare at her with a scared expression that he tried to hide with a fake menacing look and pointed at them.
“Kill them!”
All the men yelled out and ran after the team of four. They all spread out to themselves while one man ran to them to fight one on one. Mikal was locked in a counter for counter battle with an agile swordsman. He held his ground nicely because of his strength and was able to push him back a few time. His friend Lukas seemed very comfortable in his fight as he already struck a few good hits of his opponent. He backed out and engaged in another men who outmatched him in strength but was much slower. Lukas smiled and moved swiftly around to avoid heavy damage. Within a few feet away, there was Antania locked in a battle with three men who thought they could overwhelm her. Antania kept all of them at bay without taking a single hit. It seems she was sturdy of speed and strength, equally dishing out as much as she took.
“What’s wrong boys, can’t take it?” she taunted before implanting her sword in the chest of one of the men and holding her shield to block oncoming attacks from both sides of her before pushing them all off, leaving only two alive.
“I see why these three were recommended.” Althia said before slice open a bandit’s chest and kicked him to the floor. “They each have excellent attributes. Heh, hope the other squad is having as much as we are.”

Commander Wilton walked with his team through what looked like a main access room with overhanging catwalks and a few chandeliers. Wilton told them to search the room to see if they could find any leads to the bandit who murdered the store owner. Little did they know, they were being stalked. Up above on the catwalk, three pairs of eyes were watching and talking among themselves silently.
“Those are the men that Stanos sent us to eliminate.” Xune quietly said, peering down at the group of Knights and Paladins. “Weird, he said there will be eight of them. Why is there only four?”
“You know how humans are, Xune.” said another drow that was next to her. “They always lie. He probably said that just so we could come down here and do his dirty work.”
“Shut up Drakas.” another female drow spoke, her voice a little light than Xune’s. “You know this place as well as we do. They split into groups and took another way in.”
“Anyways, let’s kill this group and move onto the next.” Drakas spoke again, already drawing his weapons.
“Which one is the leader?” the other female drow asked, drawing her weapons as well.
“That one.” Xune said, pointing at Wilton as him and another one of men looked though what appears to be an old timely book.

“How are you so sure about that?” Drakas asked, turning his blood red eyes towards Xune. “And what difference does it make?”
“It makes a huge difference, asshole.” the drow girl said, looking at Drakas.
“Quinta.” Xune called to her.
“Stanos told us to capture the leader. You mess up this mission and I’ll personally kill you myself.” Quinta threatened through bared teeth.
Xune sighed and shook her head, wondering why of all the worst pairs to get stuck with was these two. She drew her short swords in one hand and held a sealed cursed dagger in the other hand. She stood up and aimed her sights on the one right next to Commander Wilton.
“Get ready you two.”
Oblivious to what is about to happen to them from above, Wilton and his men search for a little while longer. He found a couple of notes saying how they wanted to overthrow the town of Helmlond and what they plan to turn it into to. He pocketed the books and notes before reading up his men beginning to move deeper.
“Let’s get moving.” he called out, looking around at his men. “The sooner we move, the sooner we can look for Althia and her team.”
“Commander, I found something else- harrghh!”
Wilton and the other two men watched as one of their paladins fell down quickly and let go of a bunch of papers that spilled across the floor. They all locked onto the purple glowing dagger sticking out of his back. It had a bunch of runes lined vertically in a language that only Wilton knew of. He quickly drew his blade and looked up at as he saw three different colour set of eyes: red, purple, and golden. Only one thing went through mind.
“Drow.” 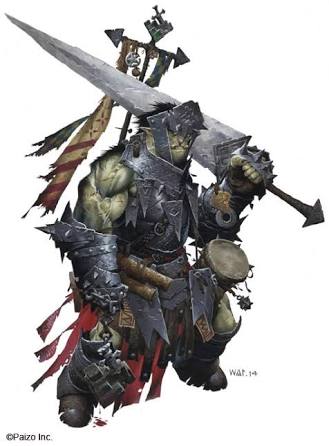