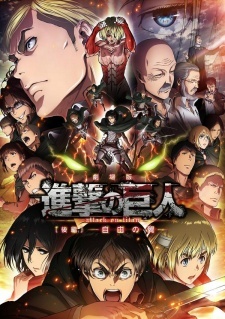 An epic disastrous anime!It is an unique concept for a shounen anime describing a story where all the enemies are the titans. Considers it is unknown where all the titans come from. The humans already trapped inside the wall. There are three walls: Maria, Rose, and Sina. It’s been for centuries no titans attacking humans. These three walls on the sudden become what most Christians belief of the Holy Trinity. The wall is the most sacred barrier that protect humans from the titans. However, they’re being isolated from the outside world. Humans only belief in religion and do nothing inside the wall. We are already know that dreaming and do nothing resulting of day dreaming. This simple thoughts awaken the protagonist of the story, Eren Yeager. Who questioning why the humans depends only on the wall. The wall itself could be destroyed by titans. The wall itself look alike The Great Wall of China. It is strong, magnificent, and beautiful. The story itself not only speaks of what happens next. But another dark story represent satire of the political world and the comunity who trusted in that.Shingeki no Kyojin already gain popularity that almost shock the world. The tragedies, how we have to struggle. The show is full of motivation that inspired many people who watch this. Including myself. The concept of titans represent our problems and how to face it. Titans could be our responsibilities. It is clear why some people in military sometimes frightened wih titans. They’re trained to be brave, willing to sacrifice, and serve the human race. They’re already concern their lives and death on the mission. But why they’re still frightened with titans? If we live in Shingeki no Kyojin world, perhaps we will understand how scarry the titans are. It is not an easy task for the soldiers. Especially the Survey Corps, which goes out into Titan territory to try to reclaim the land. The Survey Corps are heavily derided in society because of their apparently senseless high casualty rate and little sense of progress. It is hard to survive in titan teritory since the comparison human fighting the titans are far away. Until, Eren has to find out the mystery how he can change into a massive titan that could be a key to a human survival. The titan world using the nature law. The strongest one will be survived. Therefore, Eren must dispose his humanity to survive and beat the titans.The stories continues, it has many messages and motivations. What makes me think the series is the interpretations. Shingeki no Kyojin is an anime that receive so many critics about political world. It is great story sadly. But one thing that caught me so hard is the wall. And the humans living on it. This story reminds me one of my favourite album The Wall by Pink Floyd. It explores abandonment and isolation, symbolised by a metaphorical wall. And the faith of humans suddenly become blind. Speaking about this anime always reminds me about how rude the political behavior in my country are. Using religion as a weapon, and justifies by any means to reach its true goals. One reason behind this is corruptions. There are lot of stories behind it but I can’t tell you more. I disliked it intensely.In the end, I gave it a fair score. Good anime, it has an open interpretations. You can describe this show by your own, just the way this review written. The soundtrack! It’s truly amazing!! Totally outstanding! The soundtrack perhaps the most crucial thing to make this anime so epic and a good well done character development. Overall this is a good anime, and enjoyable. I cannot recommend you anymore because it is already number two the most popular anime on MAL. Or even in the world. Watch it on your own.

My Own Personal Hell