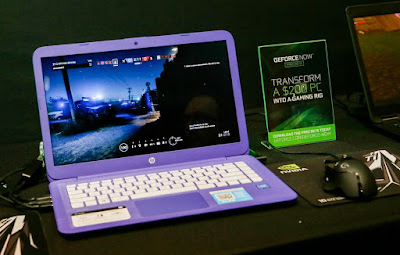 GeForce Now, letting you use a cheap $200 laptop now to play AAA games. Low processor, bad graphics chip and low storage are no longer a matter with the magic of playing a game through the Internet.

With the Nvidia GeForce Now game streaming service in beta for Windows PCs, after a beta for Macs last year – it will become a paid service eventually, but for now it’s free on a waitlist basis.
Which is a big deal for Windows unlike Macs that cost $1,000 or more. This means you may not need to buy high end gaming laptops anymore.
Nvidia also has a feature that makes things even smoother, allowing you to stream at up to 120 frames per second- even dropping to 60 or 90 fps on ocassions. Also you can install your own games from Steam, Blizzard’s Battle.net or Ubisoft’s UPlay, and carry over saved games.

Nvidia Recommends a 25Mbps or 50Mbps internet connection to take full advantage of the service.

Here’s a selection of some of the titles that you can play right now;
Just to name a few.

The Stories of Those Around Me – Manga Review