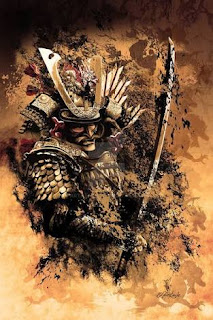 Sasume and Haru took some time to rest before going to get the magical sword from Katsumi. The whole day after coming back, Haru noticed that Sasume has became rather quite and docile from her regular self. He tried to talk to her, but to no avail. Now, Haru is walking towards the main temple to visit Master Kanata and Orochi in the garden where he found them drinking tea.
“Ah, Haru-san.” Orochi greeted, bowing respectfully as Kanata smiled at them. “Have you come here to visit Master Kanata?”

“Not entirely to visit.” he said, catching both of their attention as he sat down with them at the table. “I came here to hopefully get some answers from you, Master Kanata.”
“Sure, my child.” he agreed, setting his cup of tea down while Orochi went to make more tea. He smiled as he watched Haru staring at her facial features. “It’s not polite to stare at a woman’s face, Haru.”
Haru quickly turned around with a nervous smile then cleared his throat and crossed his arms with his eyes closed.
“It was nothing.” he said, sounding very still and confident before he turned and looked around. “I just never seen her without her mask.”
Orochi then came back with more tea and sat down on the opposite of Haru and Kanata. Listening to the silent wind that blew by and the conversation the two men were having as well.
“So, you say that Sasume has been acting differently after discussing taking the sword from the ronin.” Kanata summarized, taking a sip from his tea.
“I don’t know why. I mean, there has been missions where we have to take objects by force before and she never said anything about it.”
“Did she ever kill for those items?” Kanata questioned, looking at the wide eyes of the samurai as the sudden realisation hit him. “You never taught her how to kill?”
Haru looked down and shook his head slowly. For as long as he could remember, the close quarter combat, hand-to-hand combat, and sensing her opponents, none of them has been in the same zone as killing her opponent. He wasn’t sure of himself about what it was that kept him away from teaching her how to kill, but he knew it something that dealt with his connection with her.

“As a samurai, there will always be times where death is inevitable.” Kanata said. “That is a vital and rather difficult lesson that every samurai must learn either one way or another.”
“Will this be one of those ways?” Haru asked, most likely not going to care much for the answer.
“You’re talking about the mission of taking this sword?” Haru nodded. “In this sense, yes it will.”
Haru was silent. He began thinking about the importance of telling his younger sister about how she was indebted to kill should the time come to it. He always taught her how defeat her enemies and never to kill. A huge burden then fell down on his shoulders, like a heavy weight of guilt and dishonor. He stood and bowed to both Kanata and Orochi before walking over to the door.
“Thank you for the tea Orochi.” he said, bowing to the woman and then bowing at his master. “Thank you as well, Master Kanata. I’m not sure what I will say to Sasume, but hopefully it will be the right words.”
Walking with a small smile, he closed the sliding door behind him and made his way out the temple. Still in the silent garden, Orochi sat there in silence with her eyes closed as Kanata turned towards a certain pillar outside.
“He’s worried about you, Sasume.” Orochi said. “It seems you came to us in the right moment.”
She stepped out with a long face, looking at the door that her brother went out of. Her eyes said more words than she could ever come up with. Her fist were tightly gripped into fist while she tried her hardest to not cry from the conversation her brother had with their master. Releasing her fists, a few tears streamed down her cheeks before she wiped them and looked down.
“Part of a samurai’s duty, is to learn how to kill,” Sasume began, looking over to the hilt of her sword. “How am I supposed to do that? I can’t just take a life without remorse.”
“Then why did you become a samurai?” Orochi said softly, not being heard by anyone except herself.
“Killing is not what being a samurai all about.” Kanata assured her, walking over to the crying girl. “Protection. Honor. Duty. These are what a samurai is all about in Sanahobi. Different villages have different codes for their fighters. We do not always kill our enemies, but there will be times where there is no choice.”
Sasume sniffled a bit before looking at his face and nodding, smiling softly after his words. She looked up at the sun’s position, Sasume looked down to her master with a tear free face, ready to get her mission started.
“Now, I trust you, Haru, and Orochi here to acquire Katsumi’s sword. Can you complete this mission Sasume?” Kanata asked with a knowing smile.
“Yes, Master.” she answered, then took off to get ready for the mission. Kanata kept his smile until she was gone as he turned around to Orochi with a more serious look and tone of voice.
“You know your mission, I assume?”
“Yes, I do.”
“Then do not disappoint me.”

Back at the shrine, the trio of Sasume, Haru, and Orochi went through the gates where they found Nanami standing outside, her ears and tail showing as clear as day as she watched them through her animal like eyes. They all stopped and gripped their swords and readied themselves for what seems like a intense fight. Nanami let out a few light chuckles as she stepped down the three steps, her bare feet touching the grass with elegant steps.
“Well, three against one.” she said, flicking fire off her fingers. “That is not going to be fair.”

Way of the Blade: Chapter 4 – The Power of Ninpo