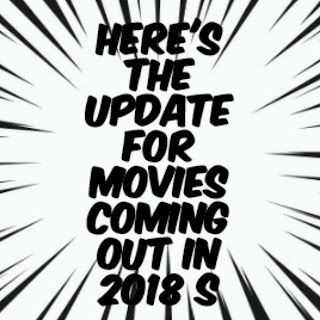 INSIDIOUS CHAPTER 4 : THE LAST KEY
I like to start this off with a horror movie to get your blood flowing so, I give INSIDIOUS CHAPTER 4 : the last key. The insidious series which have been the only movies that’s managed to scare me in a while ( basically only part 1 didn’t watch part 3 though) so if you are an adrenaline junkie if you haven’t watched previous movies and advice you to do so, however it isn’t for the faint hearted
Anyway this movies is brought to you by universals and centers around the haunting of Lin the parapsychologists family home by what looks like a ghost that can take away your voice ( from the trailer) so no one will here you scream !!! 😰😰

MAZE RUNNER 3 : THE DEATH CURE
I very much like this movie and have watched the previous parts from the shifting maze to scorch trials (the scourge full of zombies) now at what might be the final movie death cure, where Thomas must decide whether to save his friends or save the larger majority .
So if you didn’t watch any of the previous movies you will probably be lost. My expectations for this movie are kind of in the middle , I mean I don’t want to watch another Resident Evil series which is where it seems like they want to go with it

JUSTICE LEAGE
The first DC movie on our list for 2018 movies is justice league. Am not really a fan of the justice league so I am not expecting this to be an all that movie and it’s ending is going to be very predictable from its beginning. This movie doesn’t show all the members of the justice league so it features the main ones like Batman (and Alfred) , Aquaman, Wonder Woman, flash, cyborg. It’s either they misplaced superman or his still pretending to be dead, cyborg looks way too CGI ( doesn’t even look real ). It’s obvious that begin a hero doesn’t pay in DC cause flash doesn’t look like he as anything good going for him, batman is rich, Wonder Woman is an amazonian princess, Aquaman is the prince ocean (soon to be king)  and cyborg doesn’t need to eat or he would be on the same street with the flash

A jack of all trades, but master of few. He likes writing both fact and fiction, eating anything that looks tasty, pretending his life is an anime,loves watching movies, anime and reading manga,occasional a smart ass but cool and calm at the same time, pondering the bigger questions in life, and playing games of all sorts.
Articles: 16
Subscribe
2 Comments
Newest
Oldest
Inline Feedbacks
View all comments