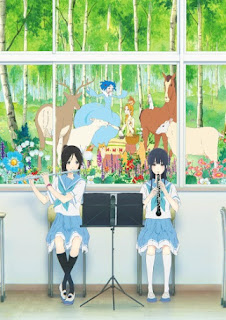 From the world’s most famous female anime director, Yamada Naoko, comes Liz and the Blue Bird. A spinoff movie of Hibike Euphonium, produced under KyoAni. The movie focuses on two Hibike side characters, Mizore and Nozomi. The story is about their relationship and personal drama, mainly focusing around the ever present music and how it plays a part in their coming-of-age and self-discovery, giving a meaning to their life and the base to their relationship. The movie especially focuses on how hard letting go off something is, and raises the question “are all good things really bound to end?” This is presented in 3 different ways. Directly in daily life, inderectly and silently through audiovisual story-telling which is mainly seen via character behavior and expressions, and the third way being the symbolism of Liz/aoi tori. The music presented is way more impactful -for myself at least- than in the actual Tv series. The art an animation is typical KyoAni for the expectation of the actual monogatari side of the story which is so fluid and gentle it looks almost fragile. Surprisingly beautiful for KyoAni who practically never tries anything new to secure mainstream appeal. Kudos for that. Basically, this is highly similar to other KyoAni movies. In a way, it’s like Tamako Love Story with different approach, but also like Koe no Katachi except this time the other lead characters is not a mary sue. For those who enjoyed these movies for their drama, and found beauty within them, Liz and the Blue Bird is more than recommendable.

A story about your life – best short poems about life