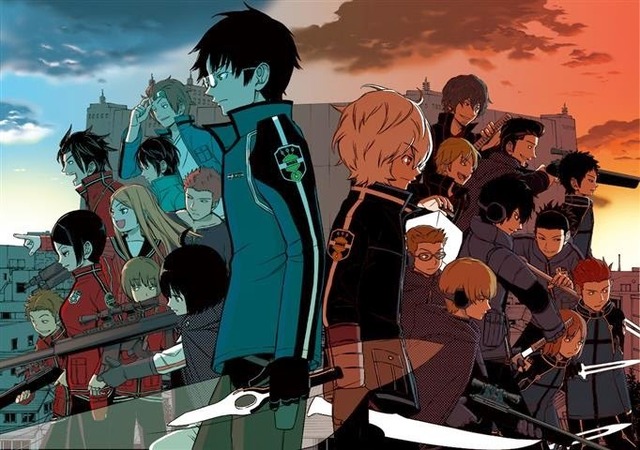 The studio cheaped out on this one, good thing the mangaka poured out his soul to compensate. This thing has more than 30 characters! 30! And all of them feel like people.

Premise is simple, there are other worlds that uses a technology called “trigger”. Just imagine it as energy that can be manipulated BUT not so simple that anything can just be created in a snap. We follow for the most part, 30 people, 30 people BUT we follow the growth of 3 the most. The story itself is nothing to write home about, it’s the cast that’s really the meat of this show and the story is basically a back draft.

You can see how the studio skimped out here, I’m a 90s kid so it’s okay with me and the 3d is used with the monsters that are already flat and geometrical in feel anyway so it’s forgivable. I can’t watch Aijin due to it being a pure 3d, this one doesn’t use 3d on people, just the monsters but if any element of 3d in an anime disgusts you, then it’s here.The action sequences are well handled, the characters look different despite having a battalion but nothing drastic is used to differentiate the characters so as to break immersion, it’s a feat really. But yeah, deduction on actual animation but plus for the sheer amount of characters and not just filler faces that it sustains.

Osamu is weak, but he’s not stupid, but he’s not overly smart either. He needs his team and his team needs him. This might not sound exciting to you but for people who love a sense of realism, this is amazing. I remember one dialogue when Osamu said that he will train hard to catch up with the others, the person he’s speaking with replies “isn’t that arrogant, since we’re also working hard to improve ourselves”. God I love the characters and the characterization in this anime, each character is given respect. Even Chica, the small girl whom I thought will be some mandatory loli fanservice was actually fleshed out. something to note tho, this moves at a pace that almost mirrors reality, so yeah, it can be quite slow BUT I swear it ramps up at an unnoticeable pace until you’re just addicted to it!Did I say 30 characters all believable?! What a cast!

It’s slow but it really does ramp up and leaves you wanting for more. God I wish for more, I need moarrr!

It’s smart, it’s action packed, it has heart and it manages to balance sci-fi with reality, action and heart and it finds a way to make the characters human. This is a great anime and definitely worth the time.