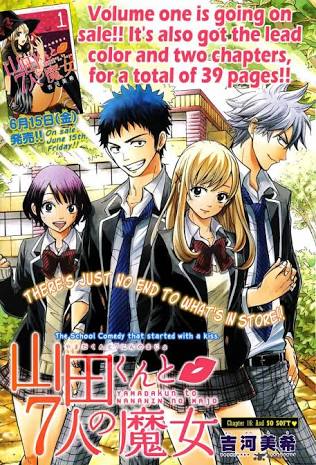 Honestly i myself don’t know why I’m rating this manga an 8. but one thing that I can tell you is, is that this manga came to me at just the right time. After reading many manga and watching many anime I was just tired of all the cliche’s and wanted something new. Maybe its because I read Ranma 1/2 idk (shit manga btw).

The characters and story are pretty good. It does get old after a while, but atlas the romance and the plot actually go somewhere unlike most romance manga I read. Literally every chapter in this manga is pretty good. During this series I never really felt board per say .

The artwork looks really good for an ecchie manga and it has that fairy tail esc design (the artwork is the only thing I really like about that manga). The character designs do look good and they are fine and overly sexualized. Which is completely fine because want I’m looking for when I’m reading a manga like this is the entertainment value.
The main character isn’t anything to write home about, but I do decently like him and he has some great chemistry wtih the other characters. If I would have to compare this manga to anything it would definitely be Kami nomi zo Shiru Sekai.
Now I do have to admit that this manga might not be for you. If your going in to this manga and expecting more ecchie action more on the side of high school dxd then thats not what your going to get. If you aren’t used to the dumb protagonist trope than you might get tired of it.
But other than that I think this manga does deserve a 9. because in the end i think the thing that maters most is how much you enjoyed a series. the art, story, and characters might not be the best, but i think this manga is completely worth your time.

Way of the Blade: Chapter 8 – Water and Fire