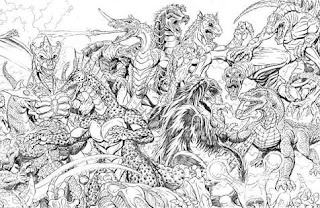 Online video games has taken the world by storm. Players from the United States to China has been digitally battling each other daily, collecting amazing and strong monsters and rising up in their ranks as top monster battler. Across the sea in Japan, they have taken online battles to exciting and new extending heights. Enter the new sport, the Virtual Summoner Battleground. Made possible by many game developers that came together to make it possible, the V.S.B has drawn many fans and followers as well as many participants to enter in the event. In the year of 2025, Virtual Summoner Battleground has gained so much attention that it has even earned its own television channel so people could watch it at home. The participators that enter are called Summoners, because they each earn a solo main monster to battle while going out to find strong minions to help the main fighter win battles easier. Many ways of fighting has been established and it as drawn in Summoners from all over the world to hone their skills and reach the top title of World’s Greatest Battler and the top prize of an elite monster to enter in next year’s competition. One of the world’s many viewer was a sixteen year old high school student named Yuuto Anami, a very competitive online gamer with good tendencies. Yuuto has been playing online games ever since he was ten years old and has fell in love with them ever since. The day that Yuuto heard there was going to be a real life gaming tournament like some of the games he played, he was more than happy. He read up on the build-up and the construction of the whole battleground that the fights will be held in.  Each fight will be in a different ecosystem depending on the main monster’s origins. Yuuto continued to read up on it whenever he got the got the chance, even in school where he was now. In classroom 3-B, Yuuto was sitting in the back of class with his tablet in hand and his ear buds plugged in, listening and taking in the excitement for the upcoming season of V.S.B. Dressed in a white dress shirt, a blue tie and a black jacket, white long pants, a pair of black shoes, Yuuto was your typical student. He had yellow hair and brown eyes that lit up with every action part he was seeing on his tablet.

“If you love exciting strong monsters and high-intensity battles being presented right before your very eyes, then the Virtual Summoner Battleground is for you. Whether you want to be one of our many fans and spectate the awesomeness or become one of the brave Summoners on the field, there is always something that the V.S.B can offer you. Coming to the Izukashi Stadium built specifically for this one of a kind event, you can be promise that this will be one amazing ride. Virtual Summoner Battleground, online gamers just became more realistic.” the announcer in the advertisement blared out in an intense voice, catching all of Yuuto’s attention before he received a slap to the back of his head, which caused him to drop his tablet and headphone on the desk.
“How do you not get bored watching that?” a male voice called out behind him.
Yuuto turned and saw a tall boy wearing a grey shirt and a black tie with grey pants and black pants. His black hair was tied in a small ponytail and his emerald green eyes starred at Yuuto with a bit of a smugness to them that the sixteen year old knew too well.
“Ahh, it’s just you Ayato.” Yuuto smiled and stood up from his desk, letting his device sit on the table.
The boy that Yuuto was talking to was seventeen year old Ayato Kawazashi, a second year just like Yuuto was. Ayato was one of Yuuto’s many childhood friends that he hung out with the most. Ayato was the most out going of Yuuto’s group of friends, coming up with crazy ideas as well as playing the most action crazed video games. Even though they mostly clowned and challenged each other a lot, they couldn’t be more closer as friends.
“You came to school much later, than usual.” Yuuto pointed out.
“Yeah, but can you blame me?” Ayato questioned with a tired sigh as he sat his bag in his chair. “There’s so many people in town all crazed out about this new sport that it’s hard to even walk in a straight line.” Yuuto giggled and sat back down along with Ayato.
“I think it’s very exciting that so many people are visiting us.” a cute girl voice spoke up, both Ayato and Yuuto looked in front of them to see a girl with pink twin tails. She turned around and presented her bright blue eyes at the boys. “This is a very exciting thing happening in our country. All of Japan is going to be watching.”
“Nayako, you’re interesting in monster battling?” Ayato asked, quite shocked by her smile of interest. She jumped a bit then pouted with her hands at her hips.
“What, a cute scholar can’t be interested in game related events?” she asked, her cheek puffed out and her eyebrow furrowed.
Her name was Nayako Hibime, the third childhood friend that Yuuto met during the time in elementary school. Nayako was always a bit bossy around Ayato and Yuuto, but was a great friend to them both as a fellow gamer. Nayako mostly focused on her school work than gaming unlike Yuuto and Ayato, but just like them, she always was very much into them. Yuuto praised her for being so good as the games they played while Ayato was always surprised.

“No no no!” Ayato said, quickly shaking his head and hands. “It’s totally fine girls can play video games that boys play.”
Nayako huffed at him and turned back around as their teacher walked in the classroom and stood at the front of the class.
“Good morning class.”
“Good morning.”
“Today, I have arranged something very exciting and special for you all. It’s a field trip!” the classroom erupted into a cheer followed by a bunch of chatter. Ayato, Yuuto, and Nayako all smiled at one another while showing great interest in this trip. “Alright, settle down. Where we’re going is what you all should really be excited about.” the class then gave him a look of confusion and question as they wondered what their teacher was talking about. “Since there are a whole group of teenagers in this school, the whole school is going on a trip to Izukashi Stadium, to watch a sparring match of Virtual Summoner Battleground.”
The classroom went silent as most of the student’s mouth were gaped open at what the teacher just said. Even the three friends that sat near each other were speechless as the teacher giggled a bit before starring at them with a smile.
“You should all see your faces.”
***

On the crowded streets of Akihabara, two school buses full of eager high school students followed each other as they made their way to the destination of Izukashi Stadium. It began construction in 2010 and was shortly off track in 2019 because of economy reasons. Built with state of the art technology to enhance the battle effects and ecosystem seem realistic, the Izukashi Stadium was the pride and joy of technological build by the Japanese. The two buses arrived at the entrance to the stadium. It was a glass dome shaped building that was cut very thick with flags and HD television screens showing the two fighters sparring in today’s match. One of the screens showed a man with long black hair and blue eyes and a woman with flowing red hair and yellow eyes. The students all starred in amazement and walked in the building where a cheering crowd was already there, waiting for the event. An announcer was standing in the middle platform all the way at the floor.
“Ladies and gentlemen, welcome to the very first match of the Virtual Summoner Battleground!!!”

My Own Personal Hell